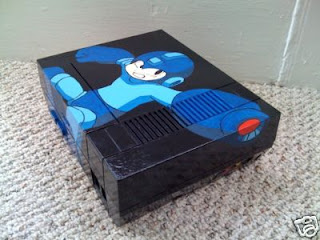 To honor the release of Rockman 9, ebay user moogmayhem is selling off a custom painted NES themed after the Blue Bomber himself.

" It's official, the Nintendo Entertainment System will have its newest game released this fall. Mega Man 9 will be released for download as a new NES game. As with many other fans of the series, I am overly excited, and thus; here is my ode to Mega Man via the NES.
This NES has been completely covered with artwork from the newest game in the Mega man series. This NES would be perfect for any fan of Nintendo or any fan of Mega Man.
I have spent many laborious hours creating a piece that is worthy enough for even my collection! The winner of this auction will receive:

This unit has been cleaned and tested. However, with any old NES, there is some degree of patience that comes with getting games to work on these machines. This auction is being presented "as is.""

You can purchase this really awesome mod for $129.99 on ebay (free shipping!)
Posted by Protodude at 2:00 AM