Monster Hunter Rise and Mega Man X DiVE cross paths this week. The crossover will debut first in the North America/European server, bringing along a whole week's worth of free pulls. When it comes to the LATAM server, the next two weeks are devoted to celebrate the "Summer Carnival".

Starting this Wednesday and for the next two weeks, the "Mission Code: R·I·S·E" event will challenge players to defeat Magnamalo Sigma over and over again to obtain crafting materials. The stage utilizes a new gimmick to traverse -- the Wirebug from Monster Hunter Rise!

With the crafting material, players will be able to craft the Magnamalo card. Most importantly, though, you can even craft the S rank saber Sinister Shadow! If you're lucky enough to get some of the materials with the lowest drop rate, you can even rank it to the max!

Looking at the characters, we have Hunter V (Sinister) a.k.a ViA, if you prefer. His first active skill is Iai Spirit Slash, an attack that damages all enemies in the path. His second active skill is Soaring Kick which perform a flying kick at the target to deal damage.

Last but not least, we have Hunter R (Kamura) a.k.a RiCO. Her first active skill is Shelling, a skill primarily used to damage multiple enemies at once. Depending on the skill card equipped you can use Crag S, Slicing S or Wyvern S, each of them have different uses.

Her second active skill is Anchor Guard. This skill will make her invulnerable for a few seconds while immobile and followed up with a powerful counter. 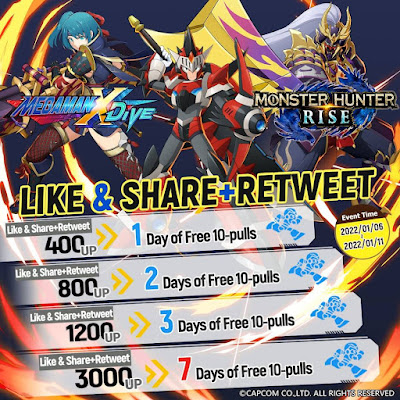 Thanks to a successful social media campaign run by NebulaJoy, everyone will get a free 10-pulls every day during the first week of the event. The second week, will bring Rathalos Armor X and for that you will have to use your hard-earned Elemental Metal.

Finally, keep your eyes peeled to the store for a special offer packed with the Hinoa & Minoto card, some Magnamalo Sigma crafting materials, and other goodies.

When it comes to the LATAM server, as summer is taking place right now in that hemisphere of the world, the event taking place for the next two weeks is the Summer Carnival.

As for the first week gacha characters... Swimsuit Roll comes equipped with Water Shield, a shield that can protect her from enemy damage and deal damage as well.

Her second skill is Swim Ring Hurl. Roll tosses her swim ring and it travels across the ground, damaging enemies in its path. After penetrating a target, the damage will be reduced to 50%.

Her second active skill is F-Splasher is a forward dash attack and damages all targets along the path. After using it three times, the next F-Splasher will increase dash speed and range.

Next week the event will bring Swimsuit Iris with a free 10-pull every day!

Later you can exchange your Vigor Coins in the shop for a selection of S rank characters and other goodies.

Enjoy the hunt or the summer vacation, whatever applies to you!