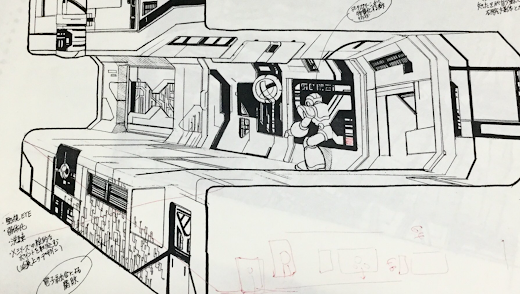 Former Mega Man series designer Mr. Pink Head is back with another piece of unseen concept art. This time, it's an early design for Mega Man Zero 1's opening stage. And it proceeds the game by almost two years. 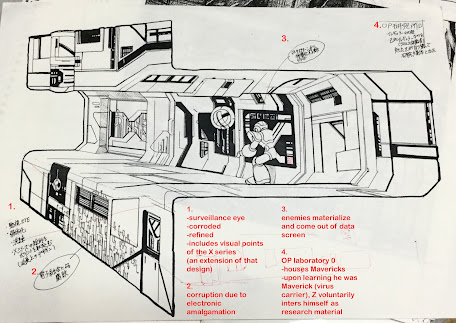 According to Pink Head, he drew this piece after Turn A Gundam aired its final episode in 2000. He was really into Syd Mead's work at the time (Mead did the mechanical designs for Turn A Gundam), and that influenced the stage's appearance. The Mead inspiration bled into the final game only a little, though. Pink Head says the design of the Transerver and some walls carry on the torch.

Pink Head's handwritten notes (translated by Midori) offer a glimpse at a some early story elements, too. The opening stage was titled "Laboratory 0", and this is where Zero interred himself as "research material" upon learning he carried the Maverick Virus. Enemies would materialize out of data screens, perhaps due to the electronic contamination. Worth a mention, but the enemy's design here veers more closely in the direction of Mega Man X, too. Neat!

Although Mr. Pink Head can't elaborate on the timeline further, it stands to reason that Mega Man Zero actually started development *at* Capcom before Inti Creates became involved (Pink Head worked at Capcom at the time; didn't jump to Inti). His comment about Turn A Gundam wrapping would place this piece around April 2000. The game itself wouldn't hit retail until April 26, 2002.

Interestingly, Mega Man X5 was also several months away at that time (November 30, 2000). In other words, Mega Man Zero's development was relatively concurrent with X5. We're not too sure when Inti Creates took point. Interesting stuff to say the least.

I don't know about you, but I have a new appreciation for Inafune's shock (and frustration) when he learned Mega Man X6 was going into production. It really puts into perspective the original plan of ending the X series with X5, then transition to Zero.

And while X6 initially threw Inafune for a loop, things worked out in the end. But, man; I really want to learn more about this pre-Inti Creates era now...