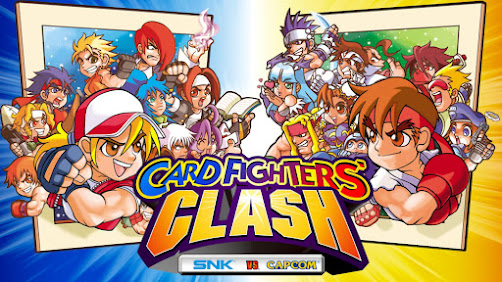 In a surprising (but welcoming) bit of news, SNK shadow dropped a port of SNK vs Capcom: Card Fighters' Clash on Nintendo Switch. It features both the SNK and Capcom versions in one! And with individual save files for the SNK and Capcom decks, you can even battle and trade between the two!

Originally released in 1999, Card Fighters' Clash pits iconic SNK and Capcom characters in heated trading card battles. If you're keen on collecting and deck building, there's a lot of fun to be had. The game has aged incredibly well too (more so than the DS outing). Hopefully SNK will follow this up with a port of the 2001 Japan-only expansion .

In terms of Mega Man characters, there's Mega Man, Roll, X and Zero. The aforementioned expansion adds a few familiar faces Mega Man Legends as well. So, again, really hoping we'll see that sometime down the line. But for now... this is just awesome.

SNK vs Capcom: Card Fighters' Clash is available now for a cool $7.99.

Posted by Protodude at 6:37 PM