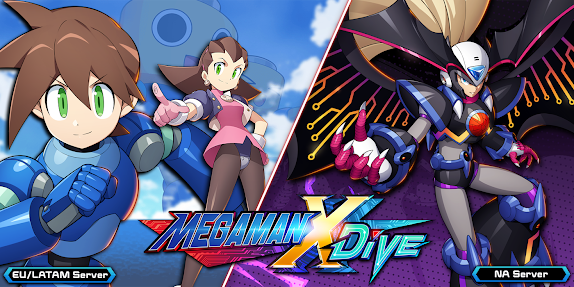 This week, Mega Man X DiVE sees the arrival of Absolute Zero in the North America server. The Mega Man Legends event finally lands in the EU/LATAM server, too. It comes after its debut in the NA server back in November 2021.

Starting this Wednesday, the capsule with Absolute Zero and the Saber Twin Fangs will be available in the NA server.

Absolute Zero's first active skill is Crimson End which performs a forward dash while swinging both claws and damage all targets along the path. You won't take damage when the skill is active.

His second active skills is Calamitous Arts. It damages all targets in range and causes them to become "slow", reducing movement speed.

If you want to check more detailed information about his skills, you can do it here.

Together with Absolute Zero, a new event with his own stage and purchasable rewards will be available for one week in the NA server. It's called the Core Chip Recycling Campaign

By playing this event and completing some missions, you will get coupons that can later be spent in the store to buy Skip Dive Programs, Skill Points, Proficient Memory Cards, Zenny, Weapon/Chip EXP Programs and memories of the DiVE Triggers Bounce Ball and Flash Bomb.

The stage is rather simple. You will be tackling three rooms with a timer and the goal is to kill waves of enemies to make stronger enemies that carry hidden elements to appear at the bottom of the screen. You need 12 of these hidden elements to get one completion stars.

Starting this Wednesday and for the next two weeks, the Mega Man Legends capsule and the event stage "Air Pirate Servbot" will be available in the EU and LATAM servers.

Mega Man Volnutt appears in the area, lured by the rumors of incredible treasures buried in the depths of the forest. He warns RiCO and the player that Air Pirates seem to have set eyes on the treasure too. Together, they venture inside the mine until they meet the Bonne family. What happens next? I'll let you discover it for yourselves!

When it comes to the gacha, the main attraction is Tron Bonne. Her first active skill is Gustaff, which lets her ride her ride armor and is capable of taking up to 225% damage. When it is active, your weapon will automatically change to Bonne Bazooka and you'll be able to use Beacon Bombs.

Her second active skill is Lunch Rush which orders the Servbots to charge forward, dealing 170% damage to the target.

You will be able to get Mega Man Volnutt from the gacha or for free just by playing the event stage. For all servers and during one week, the 4-Pickup Popularity banner with two characters and two weapons selected by the community will be available.

The capsule will grant increased odds to get Awakened Zero, Ultimate Armor X and the weapons Nightmare and Destructive Laser.

And that's all for this week. Next week the EU and LATAM Servers will continue with the Mega Man Legends event and the NA server will receive a new character!