Behind Droitclair's Design: An Interview with Ryuji Higurashi 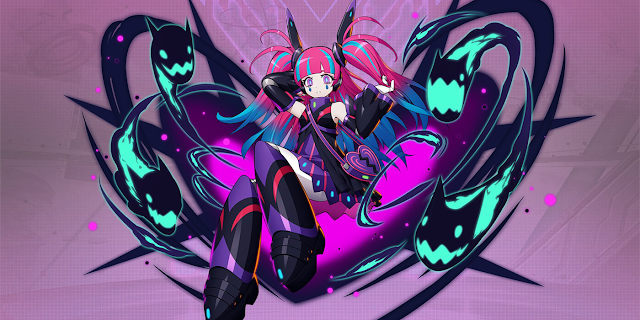 Droitclair was announced yesterday as the latest Rockman X DiVE playable character and left few indifferent. Capcom Japan and Taiwan took to social media today to give fans some insight about the motifs behind her design and personality.

First, it was Capcom Japan who shared a number of tweets with her profile and a small interview with Droitclair's character designer, Ryuji Higurashi. He was the character designer for Mega Man 11, official illustrator of Mega Man Battle Network 1 to 3 and Network Transmission, among many other things. 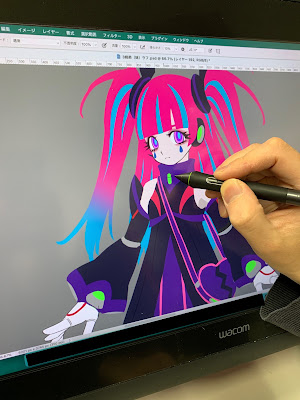 She is an unstable girl who is troubled by the conflict between her mission and her wishes behind her emotional and strong personality.

She carries her favorite pouch with her, in which she hides many of the "friends" she has made.

However, she herself doesn't really understand the meaning of the word "friend."

She is one of three siblings who have suddenly appeared, looking unlike anything in this world, and is an alien being who was born due to a bug. The siblings love each other and believe that they are the one and only irreplaceable existence, and they perceive all others as enemies and try to complete their mission.

She believes that she has only her brother and sisters, but there are moments when she tries to open her heart to the kindness of the players, but at the same time, she sees them as objects of jealousy and hatred.

She has feelings of both extremes, and is constantly plagued by instability.

What is the fate that awaits her...?

What kind of concept was the character born from?

A mentally fragile girl, with an unstable personality that is sometimes fierce and sometimes frail.

The orders were "*bangya", "devilish", "pale-skin-loud-eyes-type make-up" and "an appearance that doesn't resemble Rockman."

Is there anything in particular that you wanted people to pay attention to when designing Droitclair?

The commonality between the character and the other characters when she doesn't look like Rockman... I suppose.

Were any areas that you paid attention to or struggled with?

I had detailed orders for the characterization, so I didn't have any struggles.

If I had to say it, I was more worried about how much her appearance should be out of the Rockman line.

Lastly, please tell us something about Droitclair for the users!

As her line says, she has an older sister and a younger brother. 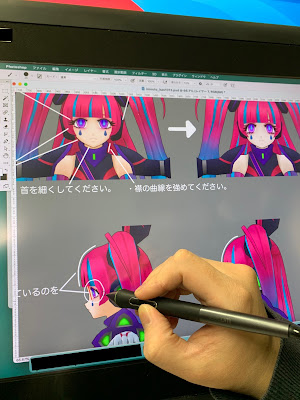 “Droitclair”, a new character doesn’t belong to any of the world of Mega Man X series. Because she is a character generated by the bug of Deeplog, her appearance is quite different from others and it’s why she been designed as a villain character that makes her really irritated.

Droit, the name those who are close to her would call; however, she will be unhappy if someone else she is not familiar with call her like this. She has an elder sister and a younger brother with her. With a polarized personality, she is sometimes timid while sometimes becomes hopeful and brave. But she would appear very frightened when her elder sister is angry.

Droit has very tangled and contradictory emotions in her heart. She is very jealous of RiCO who is on the same front as the players, but she also wants to get along well with RiCO. But the situation will be stopped immediately once discovered by her strong sister.

The mysterious Droit always carries a small bag with her. It seemed to hide her "Friends" inside. She can summon out the “Friends” to battle. However, in her cognition, she didn't quite understand the definition of a friend, but the friends in the bag would be more like a tool to protect her.

The painting of Droitclair was personally designed by the Capcom artist, "Ryuji Higurashi", who once drew the Mega Man EXE series; and was dubbed by the voice actress, ”Nami Miyaki”.

Ryuji Higurashi said, “When I first received the requirement for designing Droit, I conceived that she was a mentally unstable little girl with a polarized personality. Therefore, her exterior design incorporates the Visual Rock band, little devil and Ground Mine elements. At the same time, I would like her design being a little different from the Rockman X series characters; and in order to give her a strong sense of vision, the black clothing is matched with colorful hair color to achieve a visual impact.”. In the end, Ryuji Higurashi also reminds that Droitclair has an elder sister and younger brother that he hopes everyone would like them all.

After reading all this information, I think is safe to say Angie and Erato will follow Droitclair with designs aiming to be different from what's expected of the X series.

Droitclair will be available tomorrow with a new event called "Host of Annihilation Droitclair". It will flesh out background and explain why she became a hunter program.

Come back tomorrow for a dedicated article on the event and all the surprises it has in store for us!