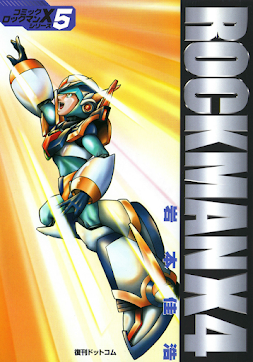 Following the English translation of Hitoshi Ariga's The Men Who Made Rockman, our friends at Azure Wind Productions (lead by Windii Gitlord with the invaluable help of Speeps) are back with the full scanlation of Yoshihiro Iwamoto's Rockman X4 manga.

Up to this point, nobody took on the challenge to translate the last volume of Iwamoto's manga. Rockman X1 to X3 were previously translated by other groups over the years, though. Azure Wind Productions not only got the job done, but they also translated the last two chapters from Rockman X3 that never got translated: Mars and Ikaros. These chapters act as bridge between Rockman X3 and Rockman X4.

What's more? They also translated the short story "Holiday" that was never made available outside their serialization in the pages of Comic BomBom but included in the 2005 reprints.

Azure Wind Production's work doesn't stop here. They also intend on re-translating Rockman X1, X2 and X3 volumes! It'll take some time, but you've got a lot of translated material to tide you over. Hit up links above to read everything or check the translation group page for a few more Rockman manga translations!