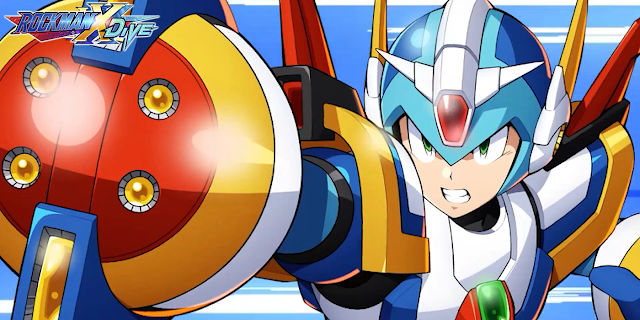 This week we have a double dose of X armors. The Global Version is getting the Falcon Armor with Fourth Armor X due to join Rockman X DiVE this Wednesday. It's a fan-favorite from Rockman X4 that's sure to be a welcome addition to the large roster of X armors. Long time coming.
Find all the details after the break!
Fourth Armor X's first active skill is Stock Charge Shot. It shoots an energy round to deal damage to the target and can be charged to deal even more damage. When reaching maximum charge, 4 energy rounds can be released at once.
One of the passive skills will weaken the enemy defense when hit by a maximum charged shot.
His second active skill is Nova Strike. The attack consumes all armor energy, rushing forward to damage the targets in its path. You won't take damage while using it.
One of the passive skills will grant him damage reduction when armor energy is 50% or higher. It will increase the duration of invulnerability when performing Nova Strike.
The capsule with Fourth Armor and the launcher "Decider's Will" which is loosely based on Rockman Zero 4's Craft will go live this Wednesday through January 12.
Which X armor will come next? Gaea, Blade or perhaps Shadow? Let us know in the comments which one you want to see!
Posted by Reploid21XX at 5:36 PM