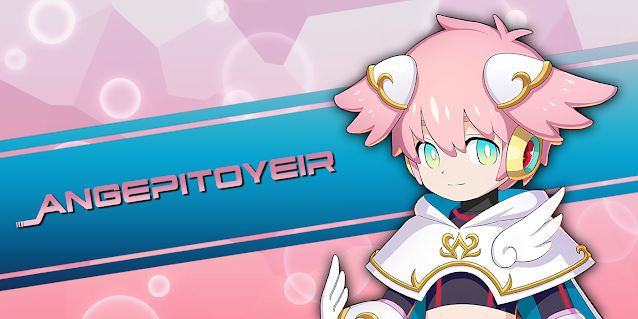 The storyline that started during the "Pulsing Force of Destruction" event stage continues to unravel. And now, on the heels of Droticlair becoming a playable, a second mysterious, original character has been revealed...

First we have to address the names. It appears that both Angie and Erato's full names are Angepitoyeir and Eratoeir, respectively.

Now, when it comes to the event storyline itself, we learned that the Deep Log errors are caused by a virus. A virus that, by chance, resides inside each of the three siblings since they were born. And stopping them will restore the world back to normal.

Rockman X... a virus. Yep; you guessed it right. The three siblings carry the Sigma Virus. Locally, the gang managed to defeat the virus inside Droitclair who manifested as Gunner Sigma. Ultimately, however, Droitclair was destroyed too.

RiCO (somehow) managed to touch Droit's body after defeating Sigma. Thus, she will be able to convert Droit into a Hunter Program, which players can acquire through the gacha as usual.

If you're interested in fully diving into this new story development, check out in the video below!

It's quite an underwhelming stage design, in my opinion. The boss fight against a boss we have fought many times before is disappointing. How cool would it have been to fight Droitclair powered by the Sigma Virus? I guess the development team didn't think about that one.

Anyhow, let us know what you think about the story and Angepitoyeir's design in the comments!