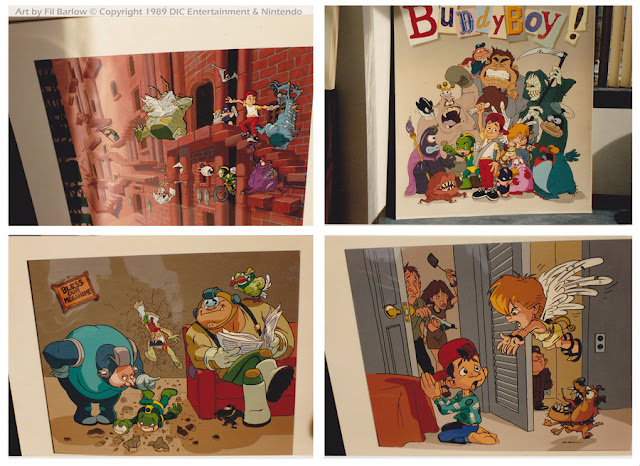 Captain N's Mega Man. What more can be said? He's a pint-sized chum who speaks in a raspy voice and wears different shades of green and yellow. He shoots lasers from his gloves. The Blue Bomber? Anything but. What's interesting, though, is during the cartoon's early production, Mega Man was almost developed even further removed from the source material.

Character designer Fil Barlow posted a set of concept art from an early version of the show dubbed "Buddy Boy" (the premise originally based on Paperboy). Alongside Executive Producer Richard Raynis, Fil pitched Captain N's Mega Man as a young lad with a mother, father, a pet bird and... a rat. This is depicted in the lower left cel above.

Fil writes, "Lower Left shows Megaman's family, his Megamum, Megadad, Megabird and even Megarat. Megaman was more of a boy, a reflection of Buddy in the Game World." He adds, "Megaman's parents were just the Incredibles idea ahead of it's time, they were once heroes, who had gotten out of shape. I wanted to base all of the character and creature designs of the games, that was the whole challenge for me."

All of this would have certainly been interesting, to say the least. One one hand I really dig the early art direction. On the other... well, I think we dodged a bullet here. I don't believe many of us could have stomached a "Mega family." Mega Rat? No thank you.

Fil has a lot more to say about the primordial Captain N. Head over to his deviantArt for the full read!