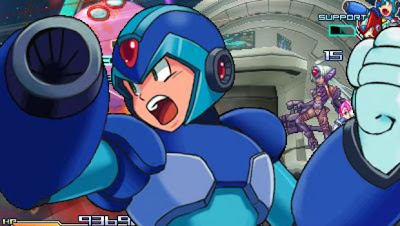 The North American release of Project X Zone has finally come. Yesterday, that is. I'm running a little late on this heads up (thank you TMMN for the reminder), but now you know in case you didn't know! Meanwhile, our friends in Europe will have the game on July 5th. Won't be too long now!

Speaking of Europe, tomorrow's June 27th Nintendo 3DS eShop update adds a second demo called "Dark Hours." This one features X and Zero. Word has it North America will also get the demo, but there's been no information as to when, though it could be tomorrow too. We'll keep an ear out.
Posted by Protodude at 4:21 PM