So this completely flew under our radar. Back in October 2012, Nintendo Age conducted a short interview with Marc Ericksen, the illustrator behind the now iconic Mega Man 2 box art. At the 3:00 mark, he finally spills the beans on the age-old question: why in the world does Mega Man have a pistol?

If you can spare a few minutes, it's well worth the watch. If you can't view the video, you'll find my attempt at a transcription after the jump. Check it out! 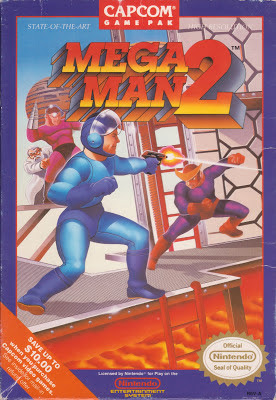 "So we're talking about the infamous Mega Man 2 where Mega Man is actually running around waving a pistol!  Okay so, the question on everyone's mind is 'how could the illustrator be such a complete idiot that he didn't realize that Mega Man had a cannon for an arm, and why is he holding a pistol for God's sake.'

What happened was I had to go down to Capcom and do a game they just got in from Japan.  They had a beta version; they were in a hurry to get this thing out.  So I went down there.  The gentlemen was the art director was there with the beta guy and they were waiting for me and I came with my pad and they started running the game.  What we saw was this little pixelated figure of the famous Mega Man running around on the screen shooting.  Bang, bang, bang, he's shooting obviously like this with his arm [Marc points his arm forward].  So I said to the art director, 'what is he shooting? What is he shooting with?'  The art director said, 'he must have a pistol because I don't see that he's got a rifle so he must have a pistol.'

'So... a pistol? You want me to do a pistol?' And he said, 'yeah, let's put a pistol in there.'  So I did what I was told and I put the pistol in there.  Add to the fact that they only had, like, a day and a half for me to do the painting and what you wound up with was not the greatest result but certainly a result that was not my fault.  It was one of those things. Here's my opportunity: I'm saying to everybody now that was not my fault! Talk to Capcom about the pistol."

And there you have it. The blame for the anomalous pistol rests on Capcom USA's then-art director. Question is, where was Inafune's Rockman 2 art for reference? You'd think those assets would be readily on hand, right?

It more or less sounds like the only thing Marc had to work with was the game itself. Interpreting 8-bit sprites isn't as easy as you might think. Marc was just doing his job with what little time and resources he had. Makes me wonder just what the hell went on during the conception of Mega Man 1's box art.

If you'd like to learn more about Marc you should really check out his blog, RetroGameArt.com. There's lots of artwork to scope out and you can even order some prints. No Mega Man 2, I'm afraid. Marc's video game designs, he says, were often stored away in some Raiders of the Lost Ark-esque warehouse or thrown away completely. The original print is most likely lost.
Posted by Protodude at 12:01 AM