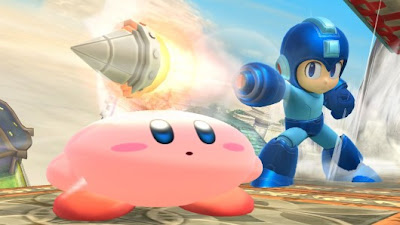 Super Smash Bros. creator Masahiro Sakurai is well aware of both Mega Man and Kirby's mutual ability to copy abilities from others. So what would happen if Kirby eats Mega Man? Would we experience some sort of universe shattering paradox? Here's what Sakurai had to say when speaking with Joystiq:

"A lot of what you're asking is still classified," he told us through an interpreter at E3. "As far as the physical appearance of Kirby," he said, "I think what you imagine is probably pretty close to what will actually happen." Sakurai put his hands next to his head, in what we're pretty sure was the international sign for "Mega Man's helmet." We followed up by asking if Kirby would be gifted with a Mega Buster. "He's got little tiny arms, so who knows."


Traditionally, Kirby acquires an opponent's neutral B move. It's largely speculated Mega Man's neutral B is Metal Blade. But because Metal Blade can be used in eight directions, it remains to be seen how Kirby can pull that off with just button combinations. We have plenty of time to speculate so... have at it.