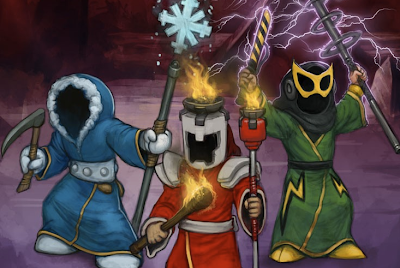 Good news for you Magicka players: the Robot Master inspired robes, which were previously discovered by Joseph Collins, are now available for download. You can grab the "Mega Villain Robe" pack on Steam or GamersGate for a mere $1.99.

In Magcika, players don robes instead of armor; you're a wizard, after all. And what better way to instill fear in your enemies than in the guise of either Ice Man, Fire Man or Elec Man? Pretty cool tribute, if I do say so myself. There's definitely a Mega Man fan or two at Arrowhead Studios.

Thanks to Joesph Collins and Niroth for the tip!
Posted by Protodude at 2:24 PM