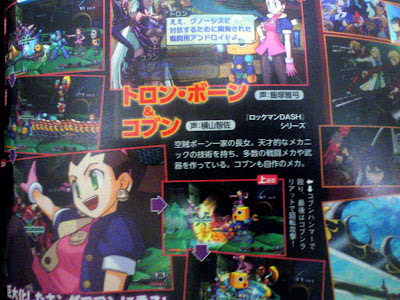 According to the latest issue of Famitsu, Tron Bonne and a Servbot will join the roster for Project X Zone. Alongside Mega Man X and Zero, that brings the total Mega Man characters up to four! The characters will be voiced by their veteran actresses, Mayumi Izuka and Chisa Yokoyama, respectively.

We have no images of the two currently, but stuff should surface within the next day or two. UPDATE: Oh look, an image.

Source: Andriasang (thanks for the tip, Rock Volnutt!), Image: The Mega Man Network
Posted by Protodude at 11:56 AM