Blast From the Past: Rockman 2 Boss Contest Ad

Remember a long, long time ago, when Capcom used to hold boss design contests? Before the internet, Capcom would get the word out to kiddos via video game magazines and comic books. Here's one such instance, with a scan dating all the way back from 1988: 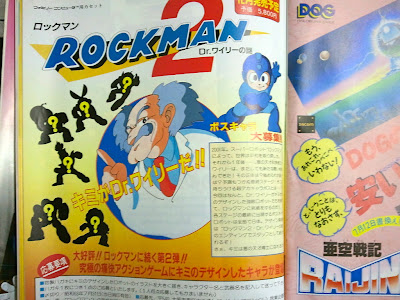 This is an ad for Rockman 2's boss contest from the pages of an old issue of Family Computer Magazine. I randomly found this in my travels and, well, it's pretty darn cool. For starters, it's history. The practice of "recruiting" children to design bosses would become a series staple for the following two decades. And it all began with this.

The premise here is pretty straightforward: YOU are Dr. Wily. It's your responsibility to whip up a snazzy robot and hope it makes it into the game. Interestingly, the contest left Keiji Inafune and his team only four months to choose a design and program all eight Robot Masters before the game's release in December (talk about cutting it close!).

The logo used in the ad is pretty interesting in itself, too. You'll recognize it from Rockman 2's beta cartridge. Rad colors, wouldn't you say?

I'm a big fan of old magazine content, so if you happen to stumble upon other neat things like the above, give me a holler.

(a big thank you to Heat Man and The Mega Man Network for the translation!)
Posted by Protodude at 7:17 PM