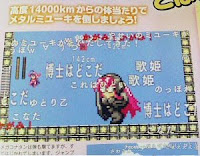 "the game appears to be a pretty faithful parody of classic Mega Man games, aside from some weirdness and the main character being one of the Lucky Star people. What I find very amusing, though, is all the “comments” plastered over the screens. This to is a parody of the site Nico Video, a Japanese service similar to YouTube which lets users upload their own videos, and then other users may comment on them. These comments will actually roll over the video at the time in the video the comment was left. It fits the theme of the game, which seems to be about becoming the greatest internet idol. How do the Japanese think of this stuff?"  --The Mega Man Network

I never quite grasped the appeal in Lucky Star, but hey, I might just have to try this!