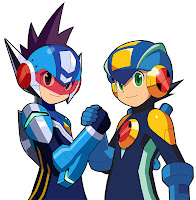 During its debut week (Nov. 9 - 15), OSS placed 9th with an estimated 22,744 units sold.  Not too bad considering that's only three days worth of data (OSS released on the 12th).  However, the following week's worth of data from Nov. 16th - 22nd, OSS plummeted to number 24 with an unspecified amount of units sold.  This is a rather severe difference to the later EXE titles, which would stay in the top ten for many, many weeks.

More updates as they come in.
Posted by Protodude at 11:47 PM