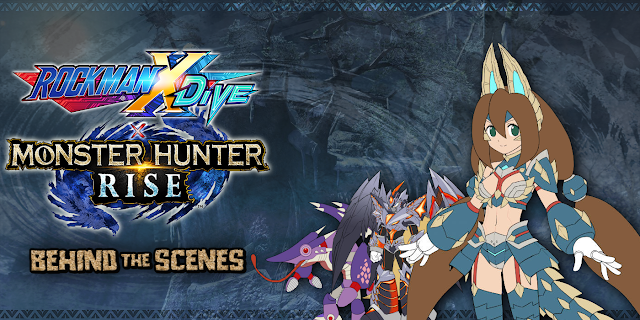 We're entering the second week of Rockman X DiVE's new Monster Hunter Rise event. And while there isn't much to talk about, we're happy to bring you a translated interview between the development team and 4Gamer. They discuss how the event came to be and designing new characters Crimson Valstrax Zero and Zinogre Iris.

You can read the translation provided by Windii Gitlord after the break!

First of all, what was the reaction to the first collaboration?

We've received a lot of positive feedback for Rockman X DiVE's first collaboration with a Capcom IP. This is the first time that characters from another title have come to the action game world of Rockman X (although previous titles have used techniques such as Hadouken), and with the popularity of the new Monster Hunter Rise game, it got a lot of attention from people.

In particular, X's "X Rathalos armor," which transcended time and the intellectual property, was a hot topic, and we were very happy to receive many comments on how cool it is or that the players were waiting for it.

So what made you decide to do this second collaboration? 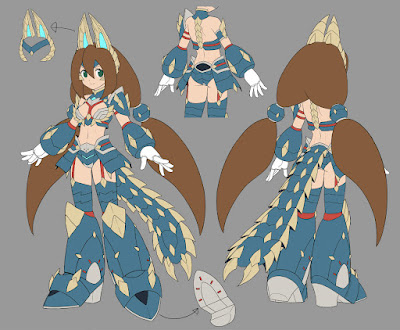 The other day, the extra-large expansion "Monster Hunter Rise: Sunbreak" was announced, and the timing of MH Rise made things even more exciting, so we wanted to surprise and entertain the fans of both games with X DiVE, and we decided to make the second collab a reality.

Are there any parts of the game that reflect the opinions and requests from the previous collaboration?

While the arrival of the collab characters in the X DiVE world and X's collab armor were well received, many people commented that they would like to see more of a sense of collaboration with the X DiVE characters regarding the "Hunter V (Sinister)" and "Hunter R (Kamura)" collab characters.

Are Zero and Iris also going in the same direction as the X Rathalos armor?

Yes. Zero and Iris are not "character + weapon, with the skills being the hunter style derived from the weapon (equipped by the character)" which was the concept of Hunter V and Hunter R. Instead, like X Rathalos armor, they are a "character + monster collaboration, with skills derived from each monster."

By doing so, we believe that players will be able to enjoy the collab between X DiVE and MH Rise even more this time.

Is the collab's story a sequel to the previous one?

The main idea of this collaboration story is the same as the last one, which was caused by a bug that caused MH Rise data to get mixed into the "Deep Log," the cyber world where Rockman X game data is stored.

However, at the end of the first collab story, there was a conversation scene between X Rathalos armor and RiCO and ViA, and we received a lot of responses from people saying that X finally spoke, so this time we've made the original X DiVE characters like RiCO, ViA and iCO more involved with the Rockman X characters.

Can you tell us more about the content that will appear in part two? First, there's Crimson Valstrax Zero. The highlight of the design is the motif of Valstrax's wings, isn't it? 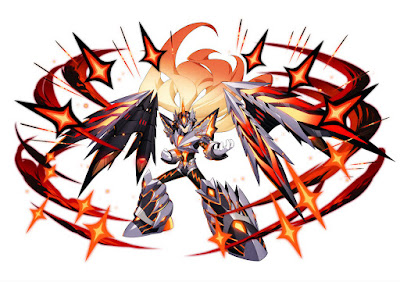 What if Crimson Glow Valstrax*, the monster known as the Star of Despair that appears in MH Rise, were to become Zero's armor? With that as the inspiration, we didn't just make Valstrax's equipment, the "Crimson Glow Series Armors" wearable; we aimed to create a "Zero fused with the monster," representing the silvery glow of Valstrax's ominous "dragon energy" in all its sparkling glory.

In addition to the silver-winged armor with a strong presence, we were also particular about the color of his hair, which looks as if it's brimming with dragon energy. The hair was adjusted based on advice from the MH Rise team, a true IP collaboration!

*A mutant of the ancient dragon "Sky Comet Dragon Valstrax" that appears in the "Monster Hunter" series (alias: Argent Comet). The normal variant does not appear in MH Rise.

So you continued to get help from the MH Rise team? 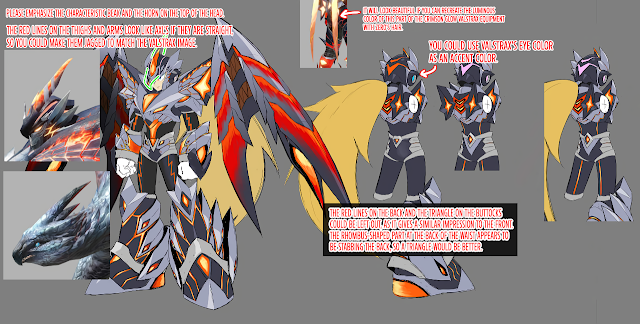 Yes, we did. The original design didn't have the single horn that rises up from the head part, but the MH Rise team came to us with the idea that he would look more like Valstrax if it had a horn, so we added it.

The single horn is also a characteristic of Valstrax, but the X DiVE design team had never imagined adding a horn to Zero before. When it came time to add it, we were able to present a Zero that had never been seen before. This was also the result of discussions with the MH Rise team.

How capable is "Crimson Valstrax Zero" in terms of gameplay?

"Crimson Valstrax Zero" has the overwhelming destructive power and speed of Valstrax. The existing Zeros, with the exception of Nightmare Zero, are mainly swordsmen, and they probably give off a strong impression that they're short-range types, but Crimson Valstrax Zero is truly multi-range. His capabilities make him worthy of being called the Star of Despair.

The skill "Crimson Glow" is a laser that releases dragon energy just like Valstrax, and is expected to deal massive damage with high firepower. In addition, "Crimson Assault," which seems to have inherited the skill of the Sky Comet Dragon, is a dashing attack, and when it enters the "Dragon Energy" status, homing bullets are added to the attack, allowing it to rain comets all over the area, just like Valstrax's powerful move.

The other character, Zinogre Iris, has also undergone a bold transformation. In the design drawings, even the soles of her shoes are clearly depicted, giving a sense of attention to detail. Please tell us what you were conscious of when creating this design. 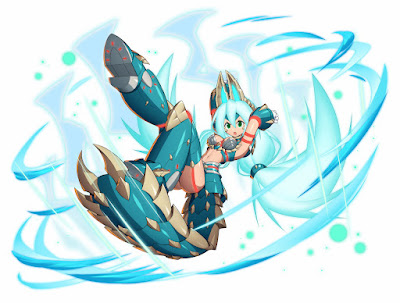 First of all, since this is Iris's first new armor, we put a lot of thought into it. Zinogre Iris was conceived as a cross between the "Zinogre Series Armor" equipment of Thunder Wolf Wyvern Zinogre, a popular monster in the MH series known as the Peerless Hunter, and we added the features of the Thunder Wolf Wyvern.

The red lines, which are similar to the armors' ornamentation, incorporate the wildness of Zinogre, and the majestic tail, just like the Thunder Wolf Wyvern's, not only looks good, but also gives her strength in battle. The result is a cooler outfit than you'd expect from her appearance in Rockman X4.

The two bundles of her hairdo are adorable, aren't they?

In the tentative draft, she wore her hair in a ponytail with the same red string as the armors because it looked easier to fight with, but we wanted to pursue a hairstyle that we hadn't done with Iris in the past. We wanted to create an image of a beast with its hands outstretched to show its presence, so we tied her hair in two low bundles, and instead of using strings, we used hair bands that would give the impression of being made of Zinogre material.

And the most noteworthy point is that when Zinogre Iris is in a supercharged state, her hair stands upside down and emits a bluish-white light, triggering the "Release of Power"! This was another element we wanted to add to the collaboration with Zinogre, as Iris has the power to fight on her own. Her eyebrows are also more angular than usual, giving her a snappy look, so please check it out. 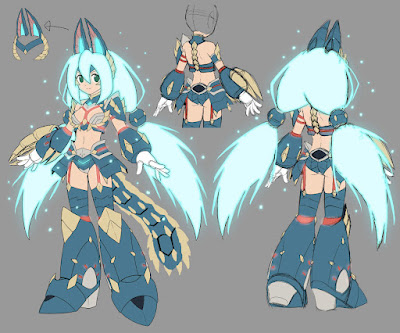 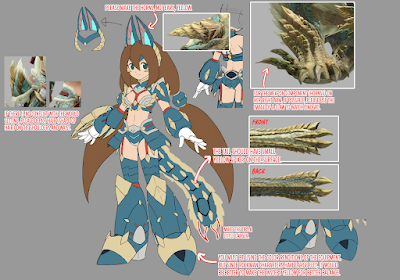 Please let us know of the user-friendliness of Zinogre Iris's skills as well. Her supercharged state seems to be powerful, and it seems to match her well.

Zinogre Iris is characterized by her mega-firepower and continuous attacks, just like Zinogre, as well as her ability to disable opponents with almost any skill attack. When the charge gauge fills up and the character enters the "supercharged" state, her attack power and speed increase, and when the supercharged state expires, it shifts to a defense-enhanced state, so the time it takes for the gauge to fill up again is not a disadvantage.

In addition, the "Blue Light Bullet" skill penetrates walls and terrain, homing in on the opponent. This also immobilizes the opponent, so you can quickly close in and reap the benefits. It's a strategy that is very typical of Zinogre.

In addition to the characters, there will also be a Tigrex-like mid-boss in the collab stage based on the "Shrine Ruins" from MH Rise.

The design looks tough and cute at the same time, but what kind of attacks will this guy have? 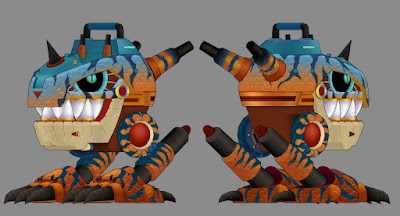 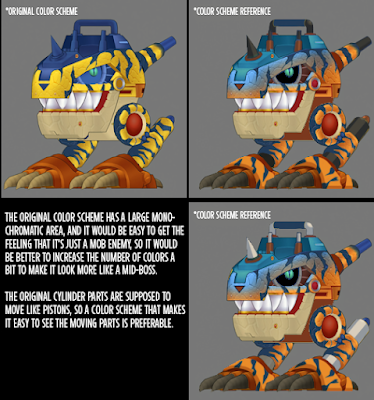 In part one, we introduced the Mettool Gigant, a mid-boss that resembles Volvidon, and we're still going strong with collab mid-bosses for part two.

As for its attack method, will it run around in all directions and suddenly jump at you like the actual Tigrex? Or will it move in a beginner-friendly manner like the REX-2000 from Rockman X? We hope you'll play the collaboration event and see for yourself!

We were also surprised to see that Sting Chameleon, the boss from the original Rockman X and other games, has been transformed into a giant Chameleos-like figure.

If you look closely, you can see that there are many similarities, but how did you come up with the idea for it? 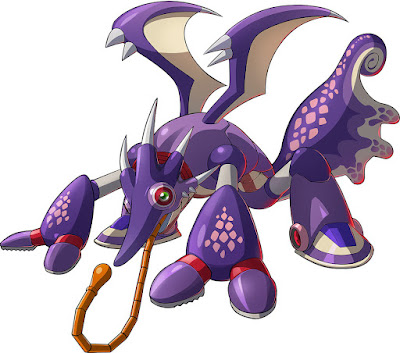 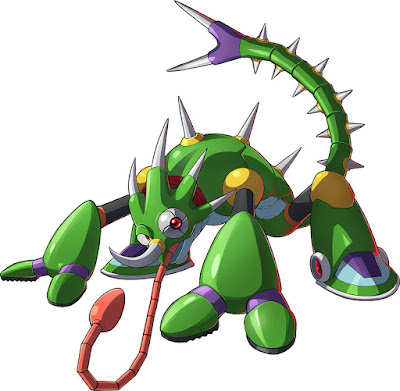 The name "Chameleos Chameleon" came to us when we were thinking about which boss to choose for the second collaboration, and we immediately thought of Sting Chameleon and Chameleos (laughs).

Chameleos, who bears the title of Mist Dragon and disappears before your eyes, seemed to be a perfect match for Chameleon, who was a member of the 9th Special (Ranger) Unit and was known as the Spirit Sharp-Shooter of the Haunted Forest, so the project went smoothly.

Are there any changes to his actions and motions?

Another major feature of Chameleos is, after all is said and done, its deadly poison, which can lead to death if touched. Therefore, this Chameleos Chameleon also has a poison attack, and will set off powerful abnormalities.

Clad in mist, he blends into the background and stabs from the shadows like a ninja or assassin. Experience the Chameleon with the power of Chameleos. 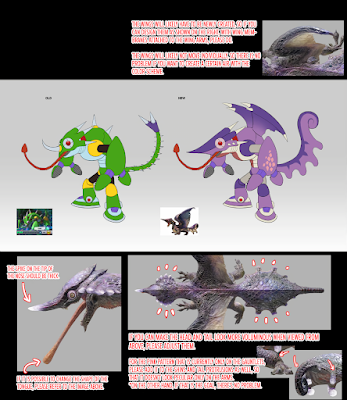 In addition to this, what about the second collab's DiVE cards?

The first round of DiVE cards was a powerful lineup, but the new cards are just as powerful, if not more so!

For the second installment, we've included Fugen, the elder of Kamura Village, Yomogi, the poster girl of a tea shop, and Teostra, Somnacanth, Rakna-Kadaki, and Almudron from the monster lineup. All of these cards are highly recommended, so we hope you'll make use of them to strengthen your characters.

Lastly, please give a message from the development team to the fans who have been looking forward to another collaboration between Rockman and Monster Hunter.

For the second collaboration, we've brought the world of MH Rise even closer to X DiVE. For the characters, as before, we had a lot of discussions with the MH Rise team and supervised them to refine their coolness and cuteness. The world where MH Rise and Rockman X are interwoven, and where you can enjoy Rockman X while feeling MH Rise, is only available here in Rockman X DiVE!

We hope that both Rockman X fans and MH Rise fans will take this opportunity to play the game and experience the charm of both games. We, the X DiVE development team, look forward to welcoming you to the world of Deep Log. So long, and go for it!

For more behind the scenes, you can check out our articles on Droitclair, iCO, DiVE Armor X, Iris -another- and an interview with Keisuke Mizuno.