Full-Frame Mega Man X4 Cutscenes Are a Sight to Behold

Nearly 25 years after it was published, a fun surprise was discovered inside an unsuspecting Japanese Mega Man X4 guidebook. Apparently, it features several frames from the game's animated cutscenes in full 4:3. These scenes were presented in 16:9 in the game itself, leaving some finer details cropped out of frame (such as the pool of "blood" from Double's victim). 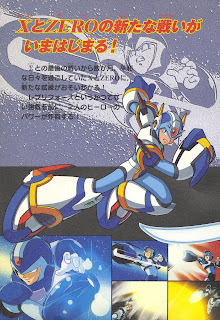 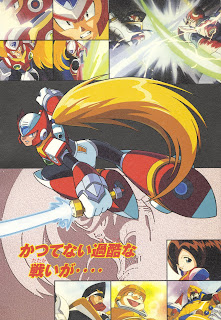 And some interesting comparisons shots:

MMcflies says he'll properly scan/crop all the frames from the book soon. But for now, you can find additional shots in this Twitter thread. I'll keep you posted when those go live. We appreciate you, MMcflies!
For now, this will be our best look at the cutscenes in their full-frame glory. Sad to say, not a single cel from X4's has appeared online. There were several Mega Man 8 cels up for auction a few years back... but nothing on this front. I really hope they're just holed up in a warehouse somewhere in Japan. Pretty sure I'd have an aneurysm if I learned they've been lost or destroyed. Oh god.
Anyway... check back for updates soon!
Posted by Protodude at 5:37 PM