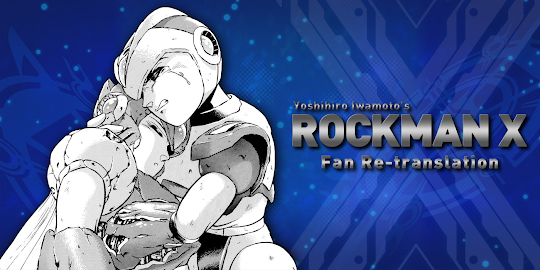 Azure Wind Productions have successfully retranslated Yoshihiro Iwamoto's Rockman X1 manga adaptation. As the successor to Dr. Neko's decades-old translation, this new version provides a more accurate representation of Iwamoto's original script. The pages have been scanned at a much higher resolution, too! Check it out here.

As previously reported, Azure Wind Productions intend on re-translating/scanning the Rockman X2 and Rockman X3 manga as well. They finished X4 in early January, in addition to two previously untranslated X3 chapters: Mars and Ikaros. It'll be a little longer before X2 and X3 are done, so go ahead and give X4 a read if you haven't already.

The "Men Who Made Rockman" is available in English for the first time, too! It's a super for fun, informative mini-series. You'll be in for a good time!

Good luck and well wishes to the Azure Wind crew. We appreciate you!

Posted by Protodude at 5:33 PM