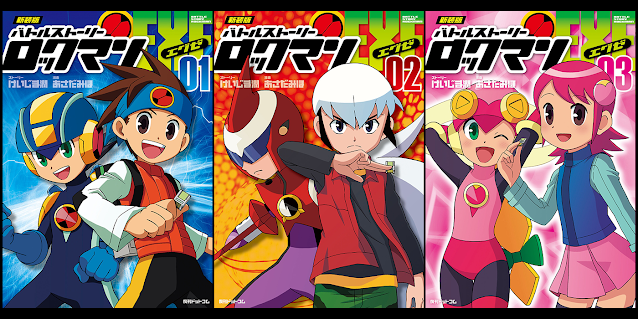 The three volumes penned by Jun Keijima and illustrated by Miho Asada are now available on Amazon Japan, Book Walker and other Japanese digital store fronts for 1,540 yen each. That's roughly $13.30 or 11,70€.

Originally published in four volumes from 2002 to 2004 and later compiled into three volumes in 2017, this manga gave us another take of the events of Rockman EXE 1-4.  A few chapters were based on Rockman EXE Battle Chip GP as well (known in the west as Mega Man Battle Chip Challenge).

These last few years have seen a big influx of digital Rockman manga releases. Rockman X, Rockman EXE and Rockman 8, and of course Hitoshi's Ariga Rockman Megamix, Gigamix and Maniax. And because Battle Story's digital release pertain to the Fukkan reprints, next in line could be Rockman 7 or the Rockman ZX manga.

Keep your eyes peeled for more!