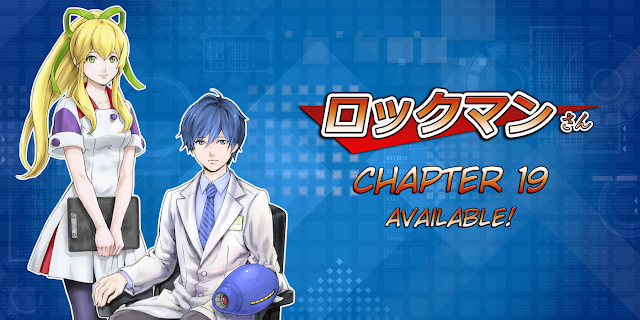 We saw them previously in Rockman-chan and now, Dr. Cossack and Kalinka have made the jump to Rockman-san just as the story gears up for something big.

Continuing the previous chapter's story, Dr. Light is experimenting with new materials in order to build a new suit for Rock, having previously submitted a full-armor proposal to the government. The secretary of defense declares it "not ideal" as it goes against the idea of Rockman as a symbol.

With other laboratories being consulted on the matter, Dr. Cossack contacts Dr. Light to offer him help. However, it turns out that he's not living such an easy life either. The rising robot rebellion has had an adverse affect on Coassack, with his computers being hacked every day. For precaution, he is upgrading one of his robots —Ring Man.

After the doctors end their conversation, Guts Man barges into the room and tells Dr. Light that he wants to be "upgraded" so he can help Rockman in the upcoming battle. Dr. Light and Rock agree that Guts Man skills are better placed in rebuilding the city should the need arise, but they will consider the option.

Looks like some excitement is around the corner! You can check out this new chapter here!