On the verge of Rockman X DiVE's 2nd Anniversary, a fan-favorite villain from the X series joins the Deep Log this week: Rockman X6's Gate in his combat armor. What's more? Tron Bonne in her lab attire from The Misadventures of Tron Bonne joins the fray too.

Gate's first active skill is Nightmare Hole. It launches a Nightmare Hole that seeks the enemy and ignores terrain. You can switch between four Nightmare Holes with different attributes according to your needs.

With the right passive skills unlocked, the attack will allow Gate gain a preventive shield and recover HP.

White Tron's first active skill is Servbot Borer Customer. It launches a Servbot Borer that rushes forward, ignores terrain and damages all the targets in its path.

Her second active skill is Focused Barrage. Tron calls for as strike that will target a single nearby enemy and damage all enemies in range with a explosion. You can switch between three debuffs and one of the passive skills will grant a shield too. 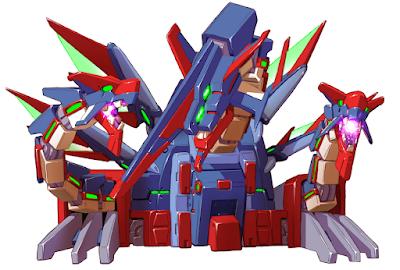 The gacha capsule also brings the S rank buster "The Monoclonius". It's based on Mega Man ZX Advent final  boss Master Albert. Worth noting is that White Tron is a limited character, so don't miss the opportunity if you like her!

The Mad Scientist gacha capsule and stage event begins this Wednesday through March 15. What do you think?