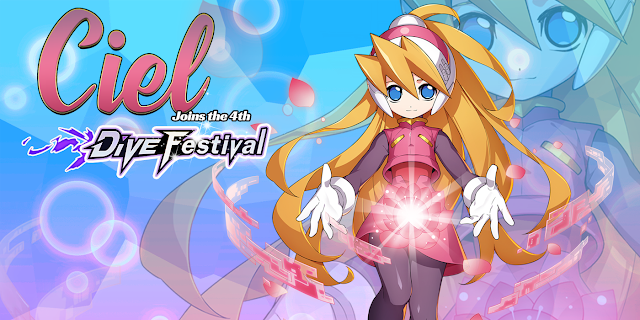 The third character from the Zero Series arrives today, further expanding the Rockman X DiVE roster. Ciel will be joining Zero and Leviathan to help players defeat "Wolf Sigma" in the newly introduced Raid Boss Event. Find all the details after the break!

Summon a cyber-elf by your side. The cyber-elf will automatically lock on to enemy and provide support fire. It will disappear either after making 6 attacks or 10 seconds.

Deploys a lotus-shaped force field that not only slows all targets in range (stackable up to 10 stacks) but also boost shots for cyber-elf.

Power Increase: When in Ciel System, increase the damage multiplier of cyber-elf's support fire by 10%.

Hacker elf: Inflict stackable  (up to 10 times) Slow when cyber-elf's support fire hits a target; the effect can coexist with the Slow inflicted by Ciel System.

Preventive Shield: Gain a preventive shield that protects you from all negative status when you use Ciel System.

Boosted: When in Ciel System, cyber-elf's support fire turns into area attacks that can go through landscapes and obstacles.


Ciel is available starting today and until September 3 at 15:59 (UTC +8). She will be voiceless the same way Iris was due COVID-19 having an impact on the game's development. Most likely, Rie Tanaka will be reprising her role as Ciel; we just have to wait a little longer to hear it!

In this mode/event, players in the same server will work together to defeat a mighty boss. In this case it's "Wolf Sigma". All players have equal combat power but the total amount of stars of their characters and weapons will be converted into attack buffs, allowing them to deal more damage to the boss. On top of this, the skills you have unlocked won't suffer any restriction like combat power does.

Each day you'll have 5 chances to challenge the raid boss, with more opportunities that can be bought using EM. In total you can buy five extra tries; the first three cost 20 EM each, the fourth try cost 50 EM and the last one 100 M.


Let's take a closer looks at the rewards. First we have the "contribution rewards" which you unlock as you deal damage to the boss. Then, we have the "ranking rewards" which will be delivered after the event ends. It's basically a competition against other players to see who does more total damage during the event.


"Wolf Sigma" has five phases. When all players in the server deal enough damage to him, he will be defeated and the next phase will start. Each phase has different rewards that will be delivered instantaneously to all players that participate in that phase.

And lastly we have the "challenge rewards" that you will get every time time you fight "Wolf Sigma", the more damage you do, the more rewards you will get.

The "Hunter Token Lucky Roulette" is available from today and until September 2 at 23:59 (UTC+8). You can claim up to 300 tokens daily and one spin cost 50 tokens. Works as it did in the past but this time the vouchers that let you try your luck in the weapon banner are replaced buy he usual 50 EM and 300 EM slots. Good luck!

New levels have been added to the Jakob Orbital Elevator, levels 46 to 50 for normal and hard mode and level 36 to 40 for challenge mode.

Due a bug in the last day of the Race Mode event, all players will receive: Electric Current Spray Gun Memory x 4.


And finally new Elemental Metal packs and memories have been added to the shop, if you want to know all the details, you can check them here.

All in all, I really enjoyed the Raid Boss event because, in addition, to the copious rewards, it's another opportunity to get new bosses on top of the story mode or the boss challenge mode. If you had the chance to play the event, let us know what you think and which bosses you'd like to see in the future. Think big!

We have just one week to get Ciel... but what's next? Perhaps it's time to get characters from another Mega Man series? Or just a chill week with a weapon banner after all the madness endured in August?

Come back early next week to find out!
Posted by Reploid21XX at 7:00 AM