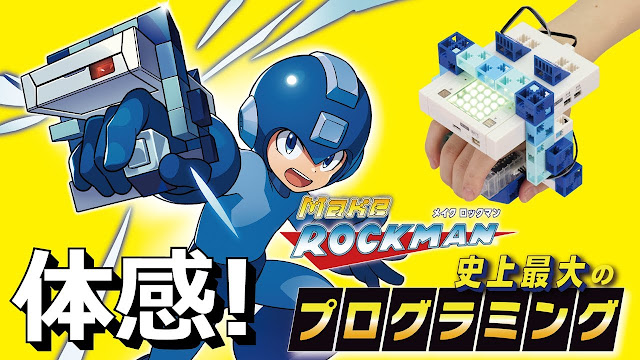 
The crowdfunding campaign starts today and will remain live for 43 days. The pledge goal is 1 million Yen (Aprox 7,945€ - $9,408) and the product will be delivered at the end of November to backers. Regardless if the campaign is successful or not, payment will be completed by October 20 which might suggest this is more a campaign to measure how many units they have to produce than a genuine crowdfunding campaign.

Let's take a look at the different pledge tiers.

The guidebook is written to be easy to understand for children and the estimated learning time is around 20 hours. The book not only contains necessary info to learn how to use Make Rockman, but also basic knowledge to help users create their own games. Beyond that, the book also contains a section called "game creator's work" to give you some insight of the video game developer profession. 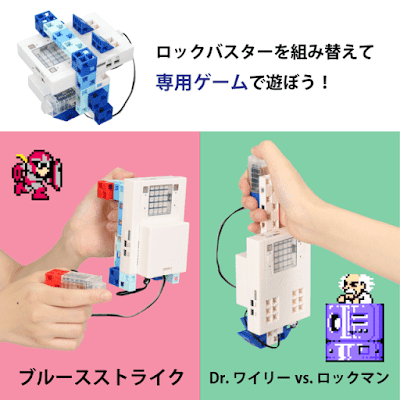 By arranging the Artec Robo 2.0 kit in a specific way, you can unlock special stages where you can control Proto Man and Dr. Wily! The game will also include the option to play against another person. For example, two players can play against each other as Rockman and Dr. Wily if they have two Artec Robo 2.0 devices, with one assembled as the Rock Buster and the other as the Wily Machine.

The Arc Robo 2.0 is equipped with a gyro sensor that lest you control the characters via motions with your hands or your whole body. Thanks to bluetooth capabilities, you don't need to have it wired to your PC. 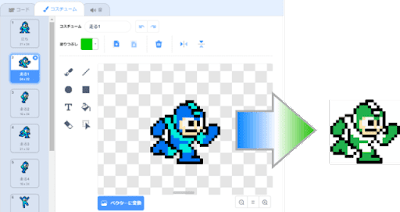 Make Rockman uses Scratch 3.0 and among the many things you can do, it's also possible to recolor sprites or change special weapons by inserting one of the Artec Robo 2.0 pieces in the main unit. 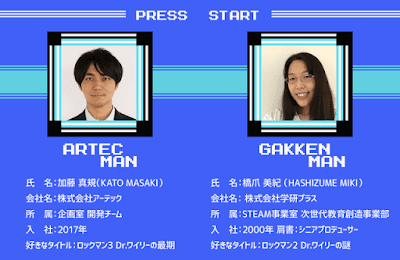 This project started with the collaboration of two Rockman fans: Masaki Kato from Artec and Miki Hashizume from Gakken.

Rockman was one of the official supporting characters for the "2018 GP League Programming Coliseum" which likely was the seed for this project to happen.

And that's pretty much it! You can see a few more images and gifs on the crowdfunding page if you're interested. It's yet to be seen just how much you can do with Make Rockman and the amount of assets from the game available to users. Nevertheless, this is an interesting project that is unlikely to reach western shores.
The crowdfunding campaign is already a success with 3.4 million Yen raised and 170 backers at the time of this writing. With 43 days left, it will be interesting to see how many people end up backing the project after the initial burst of excitement.
Let us know what do you think in the comments!
Posted by Reploid21XX at 7:49 AM