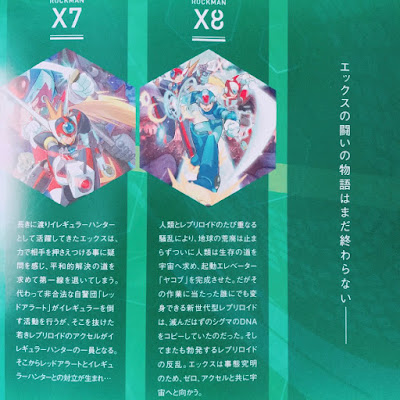 Copies of the physical Mega Man X Legacy Collection 1+2 soundtrack are popping up in Japan early, and there's a little something interesting hiding in the booklet. The last panel in the game story summary page, right next to Mega Man X8, is the following message: "The story of X's fight is not yet over."

That's the super literal translation, at least. And you know what? It sounds vaguely familiar to a certain message to fans in an old, pre-Mega Man 9 20th anniversary book: "The legend is not yet complete..."

I'm a little divided on what, if anything, this could mean. On one hand it could very well imply there is a future for the Mega Man X series – Mega Man X9 or otherwise. But on the other hand, X's fight technically never ended after X8. Perhaps it's an in-universe reference to the events of the Elf Wars, the Zero and ZX series? It's a little too early to say, maybe. We can speculate, of course. That's always fun.

Source: guu_tara (thanks for the translation, Sensei Hanzo! You too, GileumRix! )
Posted by Protodude at 12:17 AM