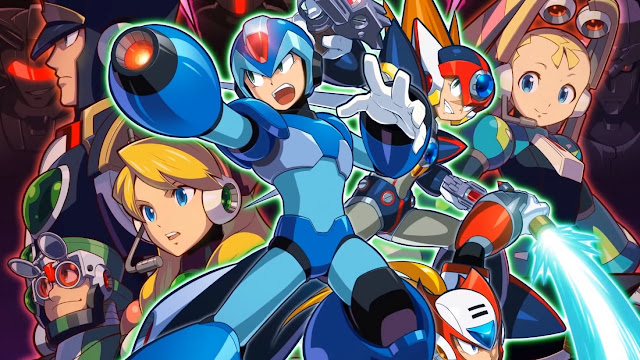 Alright. I'm not gonna be around the bush – Mega Man X Legacy Collection 1+2 is a great way to experience the X series from start to finish. However, there are *some* things that I think you might want to know about before you jump in. Let's break it down!


How do the games run?

For the most part you'd be hard pressed to tell the difference between, say, Mega Man X2 running on SNES and Mega Man X2 running here on Nintendo Switch. All eight games look and feel great. I experienced NO input lag (TV or handheld mode) nor any new instances of slowdown. I say "new" because, in the case of X1-X3, most of the slowdown you'll run into is carried over from the original SNES versions. Armored Armadillo's stage still chugs along during that last mine ride, for example. But on the flip side, ALL instances of slowdown and frame drops in Mega Man X7 and Mega Man X8 have been eliminated. This is most clearly evident in Man-o-War's stage (X8). You cruise along like butter gliding on hot toast. 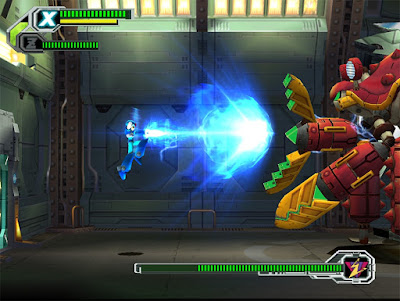 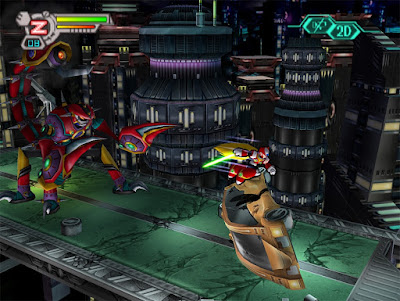 Speaking of X7 and X8, both games are indeed rendered in a higher resolution. Textures are clean, crisp and sharp. They look about as good as their respective PC versions. Disappointingly, though, much of the games' 2D elements output at a lower resolution. Menus, HUD elements, character portraits, and the like aren't pretty. It's weird – they actually have the original, hi-res X8 portraits in Legacy Collection 2's Museum but they didn't actually use them in the game. THEY'RE RIGHT THERE.

The only real emulation issue I've run into has to do with Mega Man X4. The night sky in the Sky Lagoon stage is missing a background layer. It doesn't look right. What's more, several SFX are louder than they typically are throughout the game. Neither issue is a big deal but, hey, it couldn't hurt to patch it.

Other than that, both collections perform great. 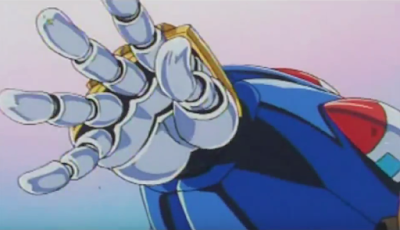 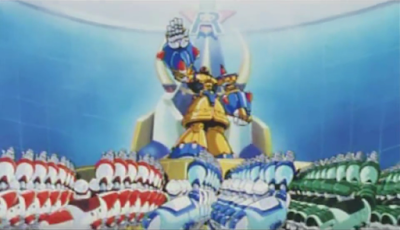 Did Capcom change or remove anything?

Yes, actually. A number of small things have been altered in Mega Man X4 through Mega Man X8.

Wait, Moonlight is gone? Are all the vocal themes gone? What if I switched it to the Japanese version?

Sorry, friend. That's a no-go. Although Mega Man X Legacy Collection 1+2 allows you to easily switch between the English and Japanese version of X6 with the press of a button, Moonlight is still missing. This applies to the Japanese versions of X4, X5, X7, and X8 as well. The vocal opening/ending themes have all been removed and replaced with their English theme counterparts. 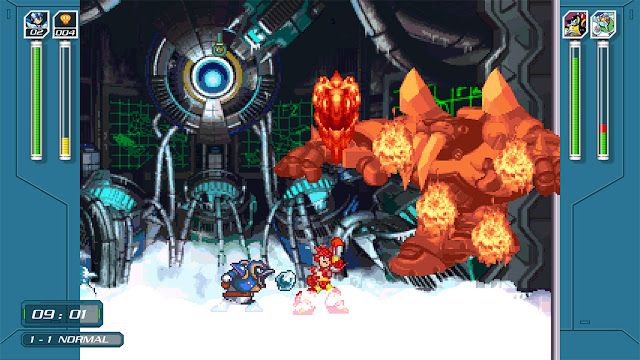 How is the "X Challenge" mode? Is there a story? Can I play as Zero?

Well, it lives up to its namesake. For the uninitiated, this mode pits players against two bosses in a series of two-on-one battles. Bosses from Mega Man X1 through X6 appear (no X7 and X8) and you choose three Special Weapons to take into battle. There are three levels of difficulty – Easy, Normal and Hard – and based on which one you beat, you're awarded with a special image.  Easy Mode's wallpaper is a cool shot of X suiting up for X Challenge. Normal Mode's wallpaper is, uh, the X8 Navigators in bikinis eating ice cream. And Hard Mode's image is... well I actually don't know. X Challenge is pretty tricky in general, but Hard mode is the true test. Maybe it's old age? I dunno. Point is, X Challenge is tough stuff. You almost have to run through it one time just to see who you're up against and THEN go back and play with the best Special Weapons best suited for the job.

X Challenge's "story" is the very definition of bare bones. It's actually three sentences long: "There are countless Mavericks who've suffered defeat at your hands. Now, somehow, they've reappeared and are causing havoc! Prepare yourself, X!" That's it.

And nope; you can't play as Zero. You can play choose to go X-buster only as an unarmored X, though.

All in all, X Challenge is a neat, albeit difficult mode. It's definitely designed with X series veterans in mind! HideOfBeast is gonna love it. 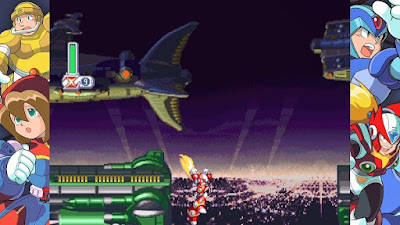 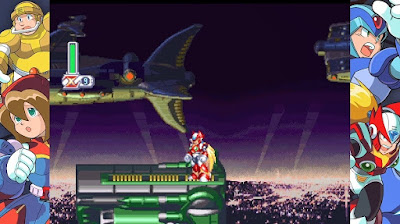 Is Rookie Hunter Mode any good?

Rookie Hunter mode is excellent for players new to Mega Man X and rusty old timers. When turned on in X1-X3, Rookie Hunter halves the damage you receive. Additionally, in X4-X8, Ride Chaser segments are greatly slowed down (use it wisely in Volt Kraken's stage) and you can no longer instantly die from spikes or bottomless pits. You can turn Rookie Hunter mode on or off any time you want! 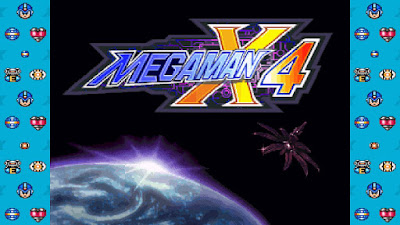 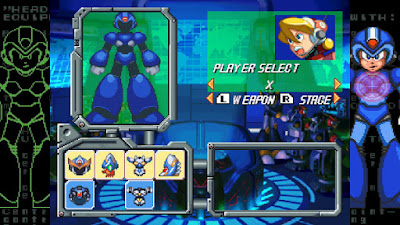 Is there a teaser for Mega Man X9?

Not this time, sadly. Unlike Mega Man Legacy Collection 2's Mega Man 11 concept art, there's no secret or unusually placed artwork here. Like I said, there is some new art to unlock from X Challenge mode and, by meeting certain conditions, you can unlock two "special" screen borders to use while you play (pictured above). I guess it's possible X Challenge's Hard mode art could be something? I'm honestly not counting on it at this point. The best X9 tease we got was from the Rockman X Anniversary Collection album, though.

What about that secret music track? What is it?

Don't get excited: it's just an extended version of the new song "Give it a Shot".


What about that "Blast through the mystery of the staff credits and return to the future" achievement? What do you get?

The credits in Legacy Collection 1+2 are actually playable! You play as X and you get to blast the credits to bits. If you destroy enough text, you get to listen to Re; Future sung by ERICA. That's it. 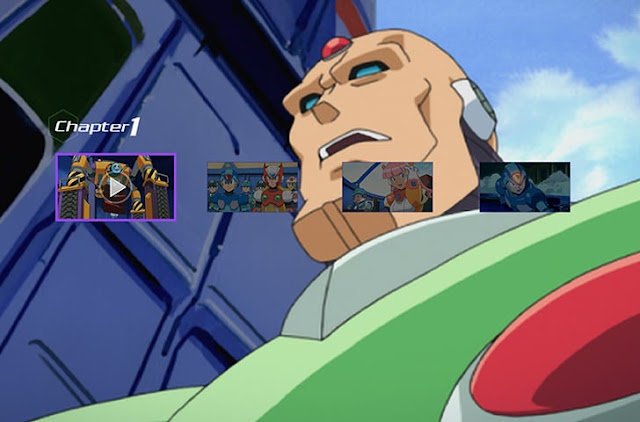 Is "The Day of Sigma" in HD? Can I watch it in Japanese?

The movie is upscaled but it still looks quite good. And yes, you can! (no subtitles though) Just switch the game's language to Japanese from the options menu.

What version of Mega Man X3 is here?

It's the Super Nintendo version. No PSX cutscenes here. Oddly enough, however, the English X3 opening/ending themes can be listen to in the Music Player. 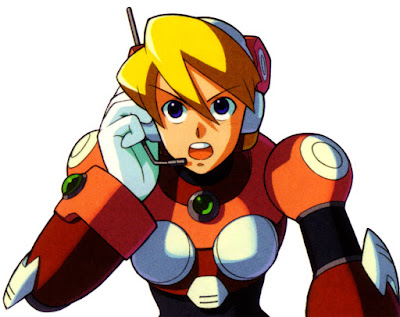 Can I turn off Alia's annoying text in X5?


What is something you didn't like about these collections?

These are two GREAT collections. Really. My only real gripe is A) it would've been nice if this was one big collection instead of two separate products and B) Command Mission and Maverick Hunter X are sorely missing. Both games play a large part in Mega Man X's history. It's a shame they remain stuck on sixth generation consoles. Xtreme 1 and Xtreme 2 would have been nice little bonuses as well.

Oh yeah, achievements/unlocks. Both collections have some really nice achievements (called "Medals" in the Switch version) with some fun little rewards. Meeting the conditions to unlock some of these rewards, however, doesn't always work like it should. For example, to unlock "Special Wallpaper 1", you're supposed to view 20 images in the Museum. I did that and nothing happened. No Special Wallpaper 1. I tried all kinds of things, like looking at 20 images for EACH game instead of altogether. Still nothing. I eventually gave up and resumed playing through the games. It wasn't till a short while later that I received a message telling me I unlocked the wallpaper. It happened randomly. I don't know what I did to trigger it but it certainly wasn't by looking at 20 images. I'm not sure if this was a glitch or if they just didn't specify the conditions all that well.

The lack of save states or MMLC1's fantastic rewind feature is a bit of a bummer, too. Rookie Hunter mode is nice, but these features set a gold standard for beginners. They will be missed among certain players!

Heck yeah, man. Capcom has done a bang-up job preserving these classic titles for the current console generation. It's clear a good deal of effort has gone into both Legacy Collection 1 and Legacy Collection 2. From superb emulation to the little things like well-written Museum profiles (they're great), there's a lot to appreciate here. If you can get the game on Nintendo Switch, absolutely do it. The added portability is so dang satisfying.

Mega Man X Legacy Collection 1+2 is now available on PlayStation 4, Nintendo Switch, Xbox One, and PC.
Posted by Protodude at 2:01 AM