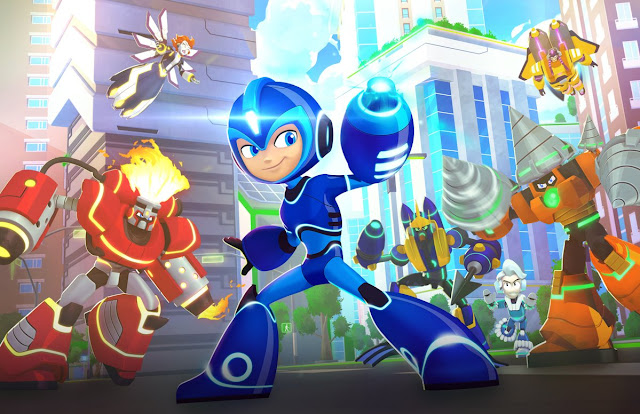 Hit the jump below for more Fully Charged news.


Via a DHX Media press release:


"Just in time for the 30th anniversary of the legendary video game character, Mega Man is returning to TV in an all-new, amped-up animated series," says Josh Scherba, President, DHX Media. "We're confident fans both old and new will love this new series, as they follow Mega Man's fast-paced adventures, beginning this summer."

"Mega Man is exactly the kind of hero we need right now," said Joe Kelly, Executive Producer/Story Editor, Man of Action Entertainment. "Optimistic, inquisitive and more focused on helping others and understanding adversaries than just locking them up. We love this character."

Mega Man: Fully Charged soaring into San Diego Comic-Con
San Diego Comic-Con attendees will be among the first to get a peek at the all-new series during the Mega Man: Fully Charged panel taking place on Friday, July 20, 6 - 7 p.m. PT (San Diego Convention Centre - Room 25ABC). Along with an exclusive episode premiere from the series, the panel features Capcom's Kazuhiro Tsuchiya (video game producer: Mega Man® 11, Asura's Wrath™), Logan McPherson (DHX Studios, VP, creative & animated production: Slugterra, The Deep, Cloudy with a Chance of Meatballs, the series) and Man of Action Entertainment's Joe Casey and Steven T. Seagle (executive producers and story editors: Mega Man: Fully Charged), who will provide a behind-the-scenes look into the creative process of reimagining this classic property for the next generation.

About Mega Man: Fully Charged
Created for kids 6 to 11, and their parents who grew up loving the video games, Mega Man: Fully Charged features exciting new technologies and robots, and the introduction of Mega Man's alter-ego, Aki Light, a normal, upbeat, schoolboy robot with nano-core technology that allows him to transform into the mega-powered hero Mega Man! With his Mega Buster arm cannon and iconic helmet, Mega Man battles the wickedest villains Silicon City has to offer. Beloved characters, such as Mega Man's robotic dog, Rush, will return – while new characters, like Mega Mini™ and Suna Light, will make their debut!
The Mega Man® franchise is grounded in a series of popular video games, first launched in 1987 by Capcom, featuring battles fought by the eponymous blue robot hero and an ongoing cast of allies and enemies. Mega Man® has spawned over 136 video games on multiple gaming systems, selling over 32 million copies worldwide, as well as a plethora of toys, comics and collectibles. Capcom is releasing the highly anticipated sequel, Mega Man 11, coming to home consoles on October 2, 2018. A highly rated Mega Man TV series was popular in the USA in the mid-1990s and aired on ABC Family.
Distribution and licensing rights worldwide, excluding Asia, for the new Mega Man: Fully Charged series are managed by DHX Media. Dentsu Entertainment manages distribution and licensing in Asia.


I have seen a lot of Fully Charged already and let me just say that the show is very much its own thing. You'd be wise to go into it with that mindset. It's not a reboot of the classic series, but it's heavily inspired by it. Go into it like its a new series along the same lines as Battle Network or even Star Force and you'll be gold.

That's pretty much all I can say right now. You'll see it soon enough!
Posted by Protodude at 10:20 AM