Ah, Mega Man Mania. It's hard to forget such a promising collection: all of the original Game Boy Mega Man titles, I-V, in a single cartridge, complete with newly added color pallets and extras.

As fate would have it, Mania wasn't meant to be. Originally announced in 2003, the anthology was met with a plethora of delays until the project was eventually canceled in 2006, due to a misplaced source code.

Though the project may be dead, the passion from the fans to see this baby green-lit remains, unwavering. Our pal Heat Man over at The Mega Man Network whipped up this truly inspiring pitch for a revived Mega Man Mania... a pitch that has gone so far to catch the eye of Capcom. 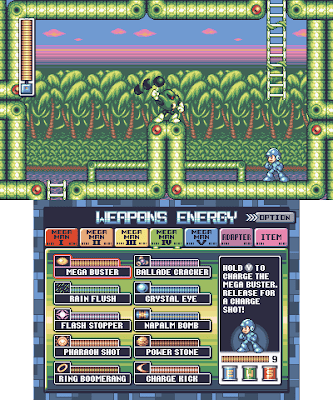 Heat Man's concept (above) calls for a complete graphical remake of all five titles, topped off with backwards compatible weaponry. In other words, "all of the powers from each game would be available for use in the other games in the collection." That alone sounds mighty awesome.

If the screenshots didn't make it obvious enough, the pitch was designed for the Nintendo 3DS. However, that's not to say the collection can't be done anywhere else. Still, the the reasoning behind the 3DS is pretty spot on:

"Also think it would be a particularly good game to have in the initial years of the Nintendo 3DS launch. Granted, this concept could work on any hardware, but coming from what were originally portable games I think it’s best suited for a portable system, and I would like to make some use of the additional touch screen. Furthermore, the 3DS lineup as we know it so far has very few games of a simpler, arcade nature. Therefore, a Mega Man Mania-type compilation could really stand out from the other numerous games for the 3DS, and appeal to people looking for a more classic, simple gaming experience. "


You can read up on the concept in full over at The Mega Man Network. I highly advise giving it a read if you're one who longs for a true blue Game Boy Mega Man collection.

You never know: if Capcom sees enough positive reception to this idea, perhaps a collection along these lines may finally come to fruition.

*do bear in mind this is a piece of fan-work. By no means does it reflect an official Capcom product
Posted by Protodude at 2:37 PM