We've seen the schematics, but now it's time for the real deal. ComingSoon.net has scored a sneak peek at Art Asylums' upcoming Marvel Vs. Capcom 3 minimate line, bring us our first look at the Zero figure in the flesh -- er, plastic. 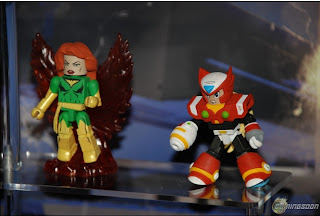 The MvC3 line is looking to release some time in July, according to this display here. It's worth mentioning that Zero will likely be sold in a box set among other MvC3 characters, so don't expect to purchase the guy as a standalone.

Still no sign of the Tron minimate, but she's supposedly on the way, too. I'll keep you posted!