Mega Man Goes 3D (But Not In The Way You Think)

We've often heard some say that classic Mega Man should make the jump into 3D, something similiar to Super Mario 64 (and onwards). While Capcom has yet to develop such a game, one fan took it upon himself to do just that. 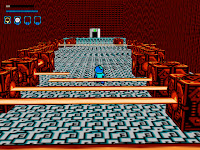 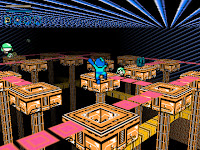 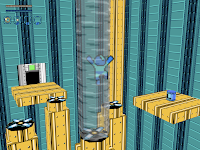 Mega Man 3D, a fan-game designed by Lierinwait, places the Blue Bomber in a wide-open, fully explorable world, powered by an impressive 3D engine that grafts traditional 8-bit sprites onto a three-dimensional plane. The result is something akin to the famed Mega Man 2.5D or 8-bit Deathmatch. Your standard gameplay is all there, too; there's enough bottomless pits and tricky foes to even make the most experienced players yelp in frustration.

Mega Man 3D is actually part of a trilogy, all created by Lierinwait. Prior to Mega Man 3D, there was the traditional 2D-inspired "Mega Man in Mega City" and the sequel to MM3D, "Mega Man 3D 2: The Siege of Mega City!"

Over the last few days, my good friend Allahweh has written an extensive review of each game in the trilogy over at her blog, Allahweh's Domain. A small sampling of her MM3D review is below, but if you'd like to read up on the rest, bounce on over to her blog:

"Like most 3D games of this type, the game is fun to play, but it suffers from clunky controls at times.  In fact, the nature of the controls reminds me of the Nintendo 64 entries into the Castlevania series, which, while good games, suffered from bad controls (trying to make a simple jump might result in one’s death).  As Mega Man games have always been about precision, and this fan-game is no exception, there are times when making simple jumps becomes a very frustrating affair."

Despite these shortcomings however, the game does make for a pretty nice substitute for an official 3D title; more so, its sequel due to a vastly improved world and gameplay.

If you've got some time to kill, give these games a whirl! You can download Mega Man 3D and its successors via YoYo Games.