Over the years, I've amassed a rather nice collection of old Mega Man assets and resources: promos, advertisments, press releases, prototype footage, and other miscellaneous memorabilia.

Despite not necessarily being classified as "news", I really do enjoy sharing these little blasts from the past; they're fun! So, continuing this endless tradition, I thought I'd share another little nugget. I dug up this old item of interest that some of you may remember, unfortunately, never saw the light of day: NubyTech's Mega Man X PlayStation 2 controller. 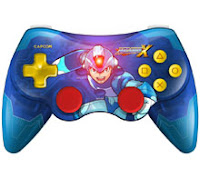 Waaaay back in 2004, NubyTech announced a partnership with Capcom to produce a series of Mega Man accessories. Kicking off this joint venture, Mega Man X-inspired Gamecube and PlayStation 2 controllers. After a slew of delays, NubyTech finally released the GameCube version in 2006, exclusively sold at EB Games and GameStop. The PlayStation 2 variation was inexplicable scrapped; all we have left of it now is the above proof-of-concept image.

If memory serves me right, it was once mentioned that the PS2 controller would have special compatibility with Mega Man X8; "lighting-up" under certain conditions during gameplay. Pretty cool idea in theory... might get annoying after a while, of course.

So why is this relevant today? For the past couple months or so, the controller has taken on a vanishing act of sorts over at GameStop's online store. Every so often, the controller appears under the store's Mega Man listings, only to vanish a short while later. The listing has no price, no release date, or description; merely the image of the controller and title, Mega Man X PlayStation 2 Controller.

I don't believe plans to release the controller are back on -- this vanishing act is likely due to a glitch on GameStop's part. Still, like Amazon's instance upon keeping Mega Man Mania listed, this is a pretty big taunt to those of us who eagerly awaited the arrival of this item all those years ago.

Keep checking GameStop online; the controller's ghost is bound to appear once more.
Posted by Protodude at 12:28 PM