Slowly but surely, Tron and Roll's efforst to rescue Mega Man Volnutt from the surface of Elysium wage on... 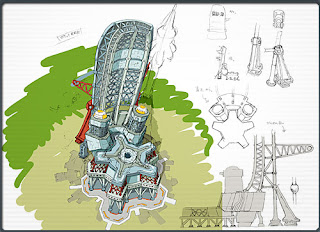 As of January 21st, the rocket's launchpad has been completed -- updating the project's total progress to 11% (an increment of six percent since December). Coinciding with this update, the devroom posted the above bit of concept art of the launchpad.

Rocket progress updates are offered once a month, viewable at the Devroom. It has been stated, or at least speculated, that the rocket's development is synonymous with Mega Man Legends 3's progress. Once at 100%, the game will go gold.

The more time invested in a game's development, the better the final product.  All we can do at this time is to continue our support of Legends 3: join the Devroom, pitch ideas in the forums, and participate in events.

Though I highly doubt we'll see Legends 3 releasing within that 3DS launch window of March to early June, I am hopefully of word of a release window soon. Maybe not a specific date but a general idea at best. We shall see!