It's not very often we saw artwork -- sculptures, namely -- inspired by the human characters that populate the Mega Man universe. Deviant-artist EnzanEXE set forth to change that: designing a series of highly detailed sculpts based off of some of the more popular, human characters of the Rockman.EXE series; Operators Netto (Lan), Enzan (Chaud) and Laika (Raika). 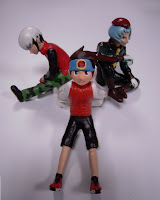 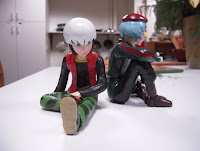 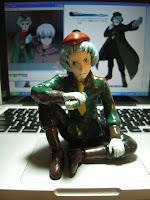 According to the sculptor, the models were made over a period of three work nights: Fifteen hours per model, and an additional five hours for painting and detailing. The final products sit roughly at four to five inches; standing up, however, they measure in at about nine inches.

Pretty cool, wouldn't you say? So, what does the future hold? Next time around, Enzan's considering tackle a Navi -- Forte.EXE (Bass), possible. What's more, she's also looking at sculpting Gospel (which, I personally, would love to see) and Cross Fusion versions of the above sculpts.

For more images and a peek at Enzan's other work, bounce on over to her Deviant-Art page right here.
Posted by Protodude at 1:13 PM