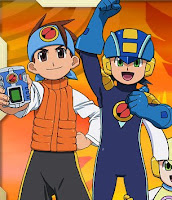 Episodes will air twice a day: once in the morning, and a repeat of the same episode in late afternoon.  According to the master schedule, it looks as if Kids-Station plans on airing all 25 episodes until December 25th.  After that, they'll either rerun the show again or move onto "Beast+", the show's successor.
Posted by Protodude at 1:04 PM