You didn't forget about Irene, did you? Rockman Online's newest Navigator stopped by the RMO blog not too long ago, but she's back again to properly introduce herself. 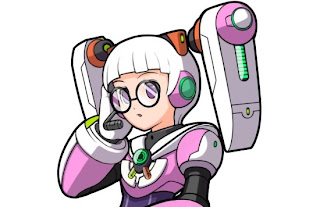 Before joining up with the UCA, Irene was orphaned when her two Reploid parents where tragically killed at an amusement park sieged by URA forces. Some time later, she pursued an education at the UCA education center, eventually becoming an official Navigator at the Hunter Agency.

Irene's top-notch analytical skills have propelled her to the highest five ranking Navigators; in fact, she's even credited with halting a sizable URA invasion on military base Gaia by decoding their plans in advance. More over, Irene has a knack for designing whole strategies and tactics in real time as battles unfold. Her fellow hunters have come to idolized her for skill, going so far as to declare her as a mascot.

In spite of her diligence, Irene is far from perfect. She's a little clumsy, often instigating a bunch of small mistakes. As of this writing, she has twenty warning from the Hunter Agency.

All in all, Irene sounds like a fun character. Hopefully, we'll be seeing more of her in Rockman Online... whenever it releases.

Thanks to Amunshen for the translation!
Posted by Protodude at 3:50 AM