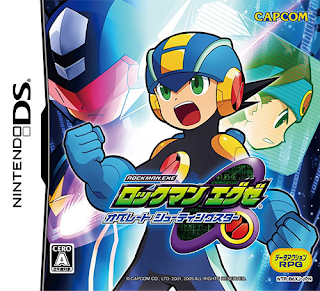 Reports are coming in from Japan that Rockman EXE: Operate Shooting Star has been released and is officially on sale. Copies will be going in the mail sometime now for those who pre-ordered online via Play Asia or elsewhere.

To commemorate the release, Capcom updated practically every section on the game's official web site, the most noteworthy being the addition of a new "download area". There, you'll find a plethora of Rockman EXE related assets to download such as official artwork, movies, sprite icons, and a flash based clock/timer.
Posted by Protodude at 7:47 AM