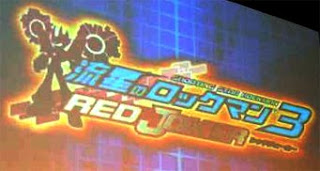 As expected, the SSR3 conference (at the Rockman Summer Festival) kicked off with a bang with the announcement of a second version: "Red Joker."

Another notable event: Apparently, Ryo Takamisaki, the creative force behind the Rockman.EXE Coro Coro manga, will be taking over the Shooting Star Rockman manga. What a surprise!

"DM says he didn’t get to see it firsthand, but got told the following:
At the Custom screen, the ‘aspect’ can be selected. Cards are stacked under ‘Support Use’ and ‘Single Use’. Support Cards use attributes, eg. non-element Area Eater, Fire-element Attack+10, Water-element Invis (?), Elec-element MahiPlus (Paralyze), Wood-element KusamuraStage (GrassStage). Single Use are the cards that are aren’t unavailable (?).

Favourite Cards to be removed? The Regular System is returning from Rockman EXE, and Program Advance-like things as well.

Voices also come back, with the title call (Shidou and others can be heard), form change, Denpa Henkan and NFB being voiced. Warrock is also voiced (eg. saying Area Eater).

The cyberworld returns! Wave In and Wave Out are replaced with Cyber In and Cyber Out, to suit the feel of a cyberworld.

Tsukasa’s seat in the classroom is empty, from the demos shown, and overall graphics have been improved."

From The Undersquare:
It seems that early-release of the versions will include special bonus white cards that act similarly to Brother Force: High Speed Black Ace or Powered Red Joker depending on the version. When selected, they will randomly roulette through four different cards, including a special Noise Force Big-Bang, which is displayed on the top left card on both White cards in the image. For Black Ace version, this is Meteorite Barrage while Red Joker version's special white card NFB is Atomic Blazer, which is likely identical to Rockman Fire Leo's Star Force Big-Bang from the first game, judging from the illustration. Both white cards also include Beast Swing 1 and an unknown battle card. High Speed Black Ace also has Wide Wave 1 while Powered Red Joker also has Attack+10.

(Note: Atomic Blazer is not Red Joker's Noise Force Big-Bang. That is yet to be revealed. Black Ace already has Black End Galaxy)

Many details about the game were revealed. In order to increase the Noise level during virus battles, you must defeat a virus with overkill. The extra amount of damage will be added. If one deals 80 damage to a 40 HP Mettrio virus using Wide Sword, the Noise level will increase by 40%. During boss battles, Noise will increase by half the damage dealt to a boss with an attack. The Noise level will only be affected by non-elemental attacks (It cannot be fire/aqua/elec/wood). Also, wind-type cards and sword-type card have been given proper designations in this game and it seems that they also will not contribute towards the increase of the Noise level.

It seems that Program Advances are also returning. The report mentions that a new card is formed when three Cannon cards are selected, forming a more powerful attack.

Like Star Force and Tribes, as well as Crosses from EXE6, the Noise Changes will automatically power down to their "Color Out" forms if they are struck by their elemental-weakness and the Noise Level will drop to 0%. Cygnus Noise has been designated "swords" as a weakness.

Some details on Noise Changes have also been revealed. Gemini Noise appears to have a Noise Force Big-Bang called Thunder Bolt Blazer. It also seems that the form will grant the Side Select ability. As for Cygnus Noise, in the "Color Out" form, it simply grants +10 damage to non-elemental cards and the Float ability. When the Noise level rises to above 50%, the transformation will fill in and Rockman will gain many more abilities, including the Feather Vulcan charged shot, which acts similarly to Mad Vulcan, +30 damage to non-time-freezing, Wind-type cards, and the Noise Force Big-Bang Meteorite Bomb, which strikes a 3x3 area twice for 140 damage per shot.

The report confirms the return of many support cards, such as Kusamura Stage, Mahi Plus, and Attack+10, though they've been revamped in some form. The Gravity Stage card will also be returning from the first game in the form of Gravity Plus, and it seems Harp Note will be able to use it. As we already know, new mugshots will be featured in this game, with War-Rock and Luna receiving new icons. The report also seems to imply that Ox will not be the first Wizard that Gonta uses. The report also mentions that a new dictionary-like function will be added to the game. There's a good chance that it's related to Kizamaro and his new Wizard, Pedia. Words that come with definitions in the dictionary will be written in red in-game and touching the words on the touch-screen will display the definitions.

Voice acting will indeed be returning. Such examples include Subaru crying out "Trans Code! Shooting Star Rockman!" during transformation, screams when deleted, a war-cry from Rock during the Beast Swing battle card sequence, or certain battle cards calls, such as Area Eater.

-You can transform into Rockman anytime without the aide of a "Wave Hole."
-"Side angled battles" (EXE style battles) can be turned on/off in the options menu.
-The Sky High Coliseum will make a return