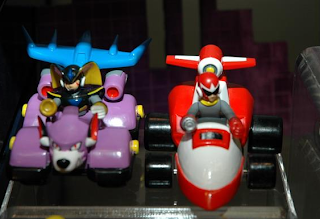 Capcom's partnership with Jazwares was a match made in heaven. From the action figure line and playsets, to the Retro Rotos, Jazwares undoubtedly produced the best Mega Man toys in the West; and yet, some of their best work never made it to store shelves.

Over at Figures.com, you can check out a gallery of unreleased Mega Man toys formerly featured at the 2004 - 2006 Toy Shows. Pictured here are two canceled figures from a planned Battle & Chase line up, originally slatted to hit stores shelves sometime in 2004.

Other canceled products of note include a battle damaged Mega Man, a Pantheon, Mega Man Volnutt, and a prop Mega Man X helmet. For more canceled/unreleased toys, check out the following galleries: