Whoa, Dr. Light To Be Playable In "Street Fighter IV?" 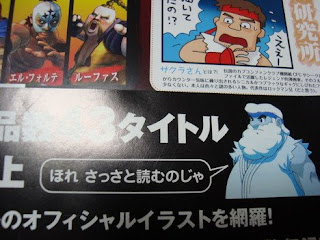 If the newest issue of Famitsu is any indication, Dr. Light may actually appear as a playable character in Street Fight IV. Joke character anyone?

Currently, a translation of the scan does not exist, so his presence in SFIV is pure speculation. However, the idea of Dr. Light appearing in SFIV doesn't seem so far fetched: the X series games are known to contain hidden Street Fighter moves, all of which are given to the player by Dr. Light himself.

Of course, this may turn out to be nothing at all. JunkmanSP has informed me the article might be making fun of Gouken's beard in comparision with Light's own. Until a translation of the article surfaces, consider this to be one hell of a rumor.