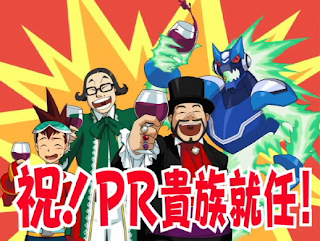 This has got to be the strangest promotion campaign I have ever seen.

Japanese comedic duo, "The Bearded Barons" have kicked off their SSR3 promotional campaign with a short video on the Wave Station. The two men speak of a sixteenth century prophecy that foretold the coming of SSR3. Weird? Yes. Entertaining? Indeed.

In other news, I received a tip that the latest issue of Coro Coro Comic will reveal a "secret boss fight" in SSR3. The identity of the boss is unknown at this time, however Coro Coro has apparently labeled the hidden boss as an "old foe." Hmm... Will see what comes of this.
Posted by Protodude at 2:00 AM