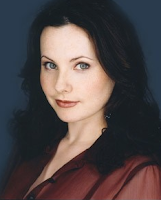 When Mega Man X5 was localized, its eight Maverick bosses were given alternate names based on the titles of members of rock band Guns N' Roses. This curious change has since gone down in history as one of the more famous alterations in game localizations, ensuing years worth of debate and speculation. Were the GnR names really necessary? Who, really, was responsible for the swap?

MMX5 translator Alyson Court, perhaps best known for her role as Resident Evil's Claire Redfield and star of The Big Comfy Couch, spent some time this evening reminiscing over her work on Mega Man X5 via Twitter, subsequently revealing the history and truth behind the game's infamous localization.

"Apparently the localization (text editing) I did for a Capcom game is *famous*. Er, make that infamous. Who knew?" [link]

"My then husband was responsible 4 text localization. He asked me 2 do it &, since he was a GnR fan, I changed the names 2b GnR references. " [link]

"I didn't know the game nor did I know how mad fans wld be that Id changed the characters' names. But yrs later ppl now like it!" [link]

"My ex-husband had his own company, GenAzea, which did localization for many Capcom games. I did a lot of that work." [link]

"...At first my hubby laughed & liked it [the GnR names]. Then when fans started complaining he got mad at me. I meant well." [link]

(do keep in mind that there's a 140 word limit on Twitter, so Alyson had to condense certain words)
Alyson, however, defends the references. Her philosophy towards localization is to make the content palatable -- going so far as to reveal that the GnR references were all but fitting for a franchise with so many musical homages and tributes.

Capcom has had every chance to switch names back to their original "canonical" titles in future X5 ports.  However, to perhaps preserve the game's historic status, Mega Man X Collection and the PC version of X5 have retained Alyson's handiwork. Hey, that's OK in my book. I, for one, thought the nods were a nice little touch -- brought some life to the bosses.

You can read Alyson's complete recollection over at her official twitter account here. She's been responding to fans, too, so if you have any questions or comments, don't hesitate to shoot her a line!