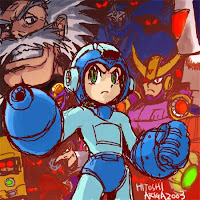 It's been a long time coming, but it looks like Rockman Maniax -- a compilation of Hitoshi Ariga's fan-art from before he penned Rockman Megamix -- looks to finally be releasing this summer.

A recent update to Brain-Navi's release schedule (publisher of numerous Rockman manga in Japan) shows Rockman Maniax listed for an unspecified June 2011 release. Given Brain-Navi's recent history of listing upcoming titles before they're officially announced, count this one as a legitimate leak.

Maniax, actually, was announced way back in 2008 in celebration of Rockman 9. According to Ariga, the book would collect a number of Rockman-based art he drew before he wrote and illustrated Rockman Megamix and Rockman Remix. Bits and pieces of this art has been shared on his personal blog and other publications in the past, but never in a single volume. Time went by, and we never heard of Maniax since.

Since three years has gone by since the original announcement, the content of Maniax could have changed greatly. For all we know, it might not be a collection at all anymore; maybe Maniax is an all new story-based manga?

We'll have to wait this one out until more details arise. I'll keep you posted.