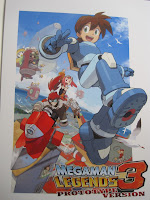 Members of the gaming press are reportedly recieving a Mega Man Legends 3: Prototype Version poster in the mail directly from Capcom -- a possible indication that Legends 3 will, in some shape or form, be present at this year's Electronic Entertainment Expo (E3).

A PRC reader (who wishes to remain anonymous), received the 12x18 poster (pictured) alongside his lanyard and paperwork upon registering as an attendee a week ago. The poster came with a plethora of other gaming goodies as part of a press kit. Due to an NDA, our tipster could not disclose those contents.

The poster's art spotlight's Legends 3: Prototype Version. However, it's doubtful Prototype Version itself will be exhibited; PV would already be available before June 6 for download by the masses. With any luck, E3 may provide first details on Legends 3 itself.

Capcom has yet to reveal what titles they intend to show off at this year's event, but those details should trickle out closer to June.

Thanks, Anonymous!
Posted by Protodude at 5:03 PM