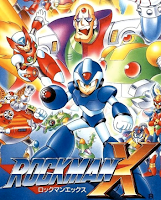 Just a little short of a week since it was announced, the original Rockman X made its way to Japanese Wiis today. Those able can download the Super Famicom classic right off of the Virtual Console for 800 WiiPoints. As with all SNES/SFC games, a Classic Controller or a GameCube controller is required to play.

X1's speedy dash to the VC can hopefully mean two things. One, that there's a revitalized interest in the SNES X games on Wii, with X2 and X3 being released within the near future. And second, of course, we'll be seeing Mega Man X on the North America/European Virtual Console not too far from now.

Keep a close watch on the ESRB and OFLC. More often than not, future Virtual Console releases are "leaked" there. A listing from either database indicates an impending international release.

I'll keep you posted if I hear anything!
Posted by Protodude at 3:00 AM