With Universe Gone, What's Next For Mega Man? 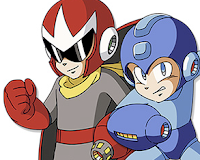 After word of Universe's cancellation hit, a feeling of uncertainty for Mega Man's future quickly set the internet ablaze. It doesn't matter if you liked Universe or not -- what matters is, something doesn't feel kosher with franchise, and it's raising eyebrows.

Ever since Inafune's leave of absence, the IP has been subjected to a downward spiral of not-so great news. From Legend 3's wavering development to Capcom Japan's negative impression of the series popularity overseas, Mega Man's future, for the first time, may truly be unpredictable.

Sharing in these sentiments is GameAbyss writer Andreas Asimakis. Andreas, like your average up-to-date fan, awoke to March 31st with news of Universe's cancellation. From there, he couldn't help but suspect something troubling was going on with the IP in general.


"For all his iterations, the original Mega Man always remained my favorite. And to see this 8-bit superstar get so much attention made me happier than words can express. But in the wake of Universe's cancellation, I honestly wonder what happens to the classic Mega Man series now. There was a time where this year's E3 would surely bring the announcement of Mega Man 11; now I'm not so sure. And what of the other retr0-inspired Mega Man title, Rockman Online? It has been far too long since we've had any updates on this ambitious game.  Am I to assume that this potentially groundbreaking Mega Man MMO will be cancelled as well?"

All speculation, of course, but speculation founded on legitimate grounds. This air of uncertainty is scary, and the silence on Capcom's end, a lack of some form of reassurance, isn't helping either.

Mega Man is just as much as Capcom as Resident Evil and Street Fighter. When you think of Capcom, you think of the Blue Bomber. It's a very important, iconic property to the company, and I highly doubt his days are numbered.

It is my firm belief that Universe's cancellation will open doors to new possibilities and opportunities. Universe was obviously suffering from a rough development, and no longer a thorn in Capcom's side, perhaps now they can pool their efforts and man-power into other MM projects. Legends 3? Maybe now development will truly kick off. The highly demanded X9? For all we know, MMU staff have been diverted to work on that at this very moment. Mega Man 11? Hey, it could happen.

Uncertainty doesn't necessarily spell doom and gloom. Quiet on Capcom's side, for all we know, could mean something is in on the burner. "No news is good news", as they say.

We have three channels to make our voices heard -- three direct links to Capcom: The Legends 3 Devroom, Ask Capcom forums, and the Suggestion Box. Capcom doesn't spare a passing glance. They are actively looking and listening to our feedback, even if it doesn't appear that way.

Show support for the franchise, and take advantage of these channels. If you're concerned about the franchise's future or want to aid in its development (join the Devroom!), raise your voice.

We got Mega Man 9 to happen; Legends 3, almost, too. Someone's listening.
Posted by Protodude at 1:12 PM