Shigeto Ikehara’s Rockman 7 manga is making a comeback later this spring, and as anticipated, the 2011 reprints of volume 1 and 2 sport semi-new artwork by Ikehara himself. Mighty cool illustrations, if you ask me: 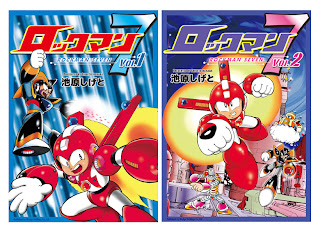 Both volumes, original slated to ship at the end of March, are now looking to release on April 27. The Rockman 8 manga reprints, however, remain penned in for May.

For now at least, the books will remain exclusive to Japan. However, given Udon's recent track record of localizing new Rockman manga a year to months after a domestic release, we may yet see an English version of RM7. Fingers crossed!