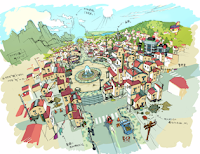 The Australian Classification Board has updated with a rather curious rating for a "Mega Man Legends 3: Prototype Version."

The subtitle of the product seems to carry the notion that this is a demo version of Legends 3, something that shouldn't come as a major surprising given that Capcom previously hinted something similar sorts was in the works.

It's worth mentioning that the OFLC doesn't usually rate demos. However, "extended preview" versions of popular titles such as Gran Turismo 5 Prologue, and Dead Rising: Case Zero were previously subjected to classification. Could this mean Mega Man Legends 3: Prototype Version offers content that goes beyond your run-of-the-mill demo? A miniature game in itself?

We'll just have to wait and see. Capcom has yet to comment on this tidbit of news, but we'll keep an eye out on the Devroom. If there's news, it'll come from there!

Source: OFLC (via The Mega Man Network)
Posted by Protodude at 8:02 PM