I'll admit I was pretty shocked to see Zero kick the bucket all those years ago In Mega Man X1. Four deaths later, however... eh. I've pretty much grown accustomed to Zero dying and reviving time and time again, so the act leaves very little of an impact nowadays. Upon stumbling across this amazing piece by Doomsplosion, however, I began to feel some sympathy for the demise of the red crusader once again... 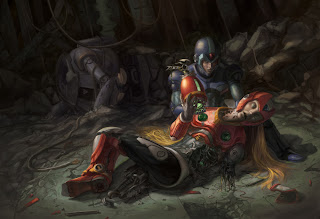 Lo and behold this awesome (and somewhat morbid) rendition of Zero's death in X1. I haven't felt this depressed towards the scene since, well, ever. Gosh, I mean just look at that; there's like this "holy" air to it. I don't believe I ever seen such a profound piece of fan-art before. Who knew one of the series biggest tropes could ever look this beautiful?

Literally just before I hit the publish button on this post, I picked up on a neat little detail: what's Zero holding in his hand? Yup, it's his arm cannon -- the "secret" buster upgrade in X1 given to players who passed up the traditional upgrade early on. Just one of many little details that help make the piece all the more epic.